Leakage is the most common problem with dishwashers, refrigerators and freezers. Users of General Electric refrigerators may also experience intermittent water leakage. This problem indicates a malfunction of certain mechanisms or improper operation of the device. In the event of a regular leak, you should pay attention to the operation of kitchen appliances. What are the causes of leakage and how to troubleshoot, we will consider in more detail in the article.

The formation of a puddle of water next to a GE refrigerator does not always indicate a malfunction. But it is still recommended to carry out preventive diagnostics, since the constant appearance of fluid is one of the signs of a breakdown. To make sure that there is a technical malfunction, several actions should be taken.

The first step is to determine the source of the leak. Not completely closed door of the refrigerator or freezer leads to leakage, and as a result, to equipment breakdown. You should make sure that water did not appear near the refrigerator for other reasons: accidentally spilled, flowed out from under the sink, battery or other household appliances (dishwasher, washing machine). The reason for the formation of a puddle may be a power outage or a freezer not previously prepared before defrosting. It is necessary to check the contents of the refrigerator, you should also not exclude the fact of spilling liquids inside the refrigerator compartment. 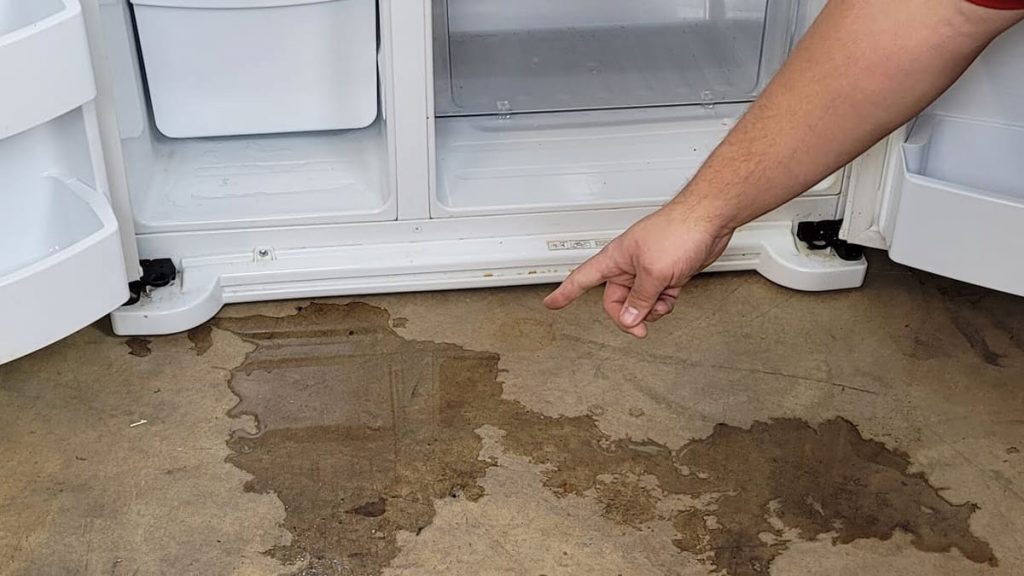 Malfunction of household appliances can occur for several reasons:

All models of GE refrigerators are equipped with a special valve that controls the flow of water. The part is located at the back of the appliance, at the point where the refrigerator is connected to the water supply system. The operation of the intake valve is mechanical. When the device needs water to operate, the mechanism sends signals to open the shutter. After receiving the required volume of liquid, the valve closes automatically. The work of the part helps to avoid overflow of water in the refrigerator. Violation of the tightness of the mechanism leads to regular leaks of equipment. If the integrity of the valve is violated, water seeps through the crack through the back wall, which leads to the formation of a puddle around the refrigerator. The reason for the breakdown of the mechanism can be a snug fit of the device to the wall, as a result of which the valve is subject to constant mechanical stress.

The damaged part cannot be repaired. A damaged valve cannot be installed; the problem can only be solved by a complete replacement of the part. It is necessary to determine the exact parameters of the GE model in order to purchase a suitable inlet valve. 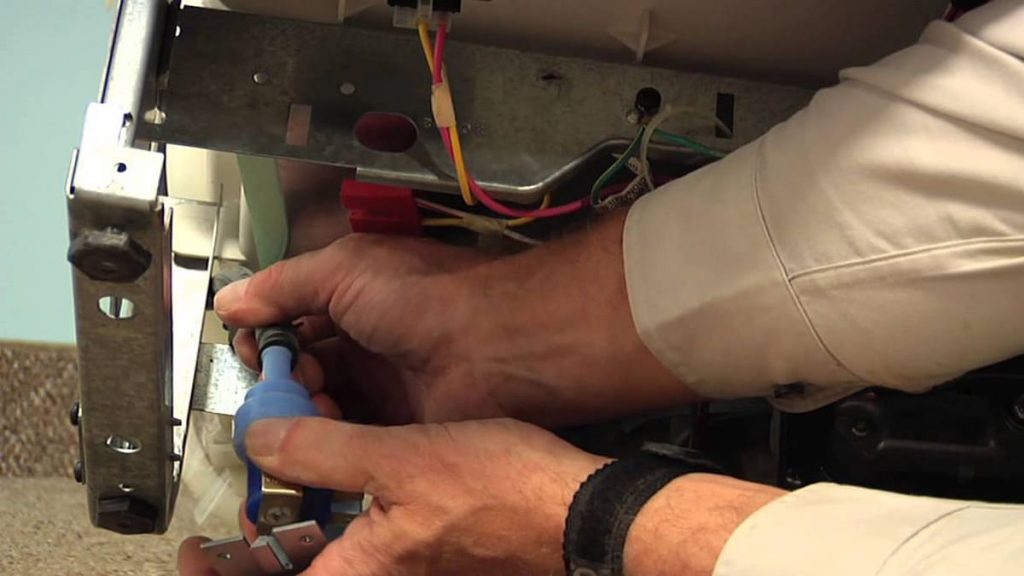 The mechanism is located at the back of the device. You need to carefully remove the back panel, after disconnecting the refrigerator from the power source and the water supply system. Then you should disconnect the hoses connected to the valve, remove all the clamps and remove the unusable part to install the new mechanism. After connecting the hoses to the new valve, it is necessary to check the operation of the refrigerator.

Breakage of the drain hole of the refrigerator compartment GE

As a rule, General Electric refrigerators are equipped with a regular automatic defrost function. This is necessary in order to eliminate excess ice that freezes during operation of the device. A built-in drain ensures that water is drained through a drain hole where it evaporates. When freezing or blockage forms in a special pan, water flows out of the refrigerator chamber onto the floor, forming a puddle. The drain hole can become clogged with food or debris that blocks excess fluid from escaping. In addition, during automatic defrosting, the water temperature is significantly low, which can lead to freezing of the drain hole responsible for draining. 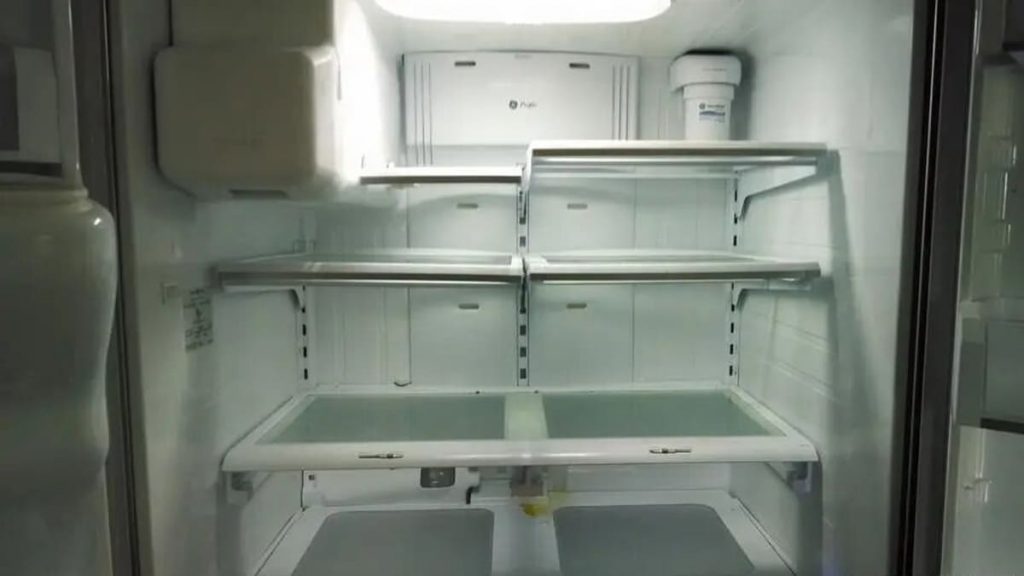 The hole is not equipped with special heating, so you need to carefully monitor the operation of the mechanism. In the event of a blockage or frost build-up, quickly remove the accumulation of ice or debris by hand. To fix this problem, you need to remove the camera from the shelves, remove the front panel and remove excess liquid. Then you should pull out all the accumulated debris that blocks the drain hole. Ice buildup can be melted by applying heat, such as steam or hot water.

Attention! It is better to melt the freezing with a syringe or a medical syringe with gentle movements. You need to act carefully, otherwise the integrity of the part may be damaged. Do not use equipment that generates high temperatures. Saturated heat flow deforms plastic parts.

Malfunctions of the drainage pan include violations of the integrity of the part. The mechanism designed to evaporate water may crack during operation. In the presence of mechanical damage, the pallet is not able to perform its function qualitatively, and the thawed moisture flows directly onto the floor. In this case, the part must be replaced immediately, repairing cracks with glue or other hermetic means is only temporary. The drain pan is located at the bottom of the refrigerator. Having previously removed the back and front panels, you need to carefully pull out the defective part, which may contain a large amount of liquid. Then you need to install a new drain pan and fix all the relevant parts. 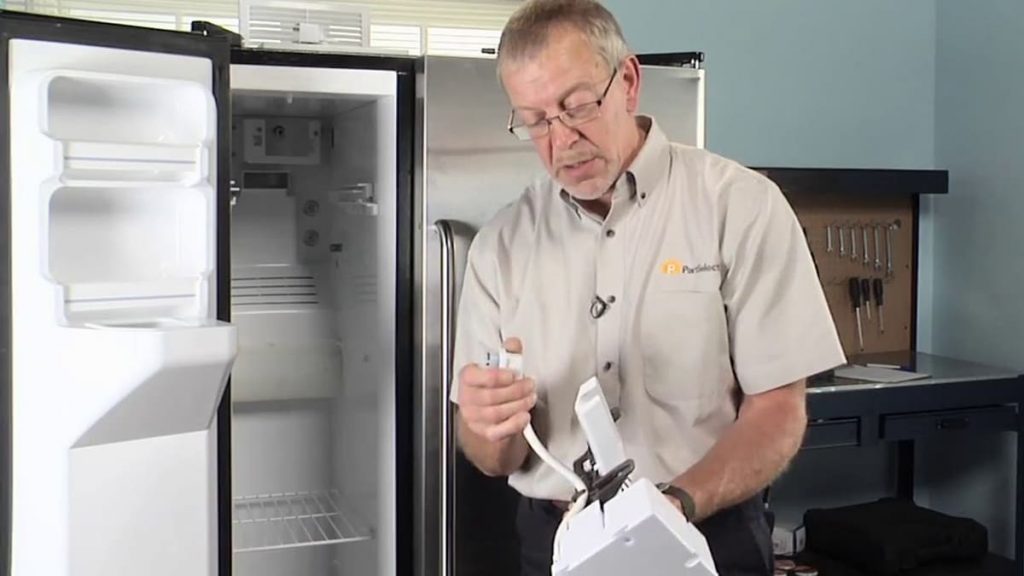 Users of GE Monogram refrigerators may experience a leaking problem at the top of the unit. The appearance of such devices is significantly different. They are built-in structures of large volume, the compressor and all mechanisms of which are located in the upper part of the refrigerator. The drainage pan, which is responsible for the evaporation of excess moisture, is also located on top. Thus, the leakage problem is identical with the standard GE models, the difference is only in the area of water runoff. You can fix the problem by completely replacing the part or cleaning the drain hole from the accumulation of debris or ice.

The drain responsible for draining water during the period of regular automatic defrost in GE Profile refrigerators is located behind the front panel of the chamber. If it is necessary to install the part, you need to release the refrigerator compartment from the shelves and unscrew the clamps to remove the outer panel.

Even after the blockage and frost have been removed, the GE refrigerator drain will continue to disturb users intermittently. As mentioned earlier, the device is not equipped with an anti-freeze part heating function, and the temperature of the liquid formed after automatic defrosting is too low. Thus, freezing cannot be prevented.

Automatic defrosting of the refrigerator occurs at least once a day. If the drain is heavily frozen, there is a chance that the full defrost cycle has not been completed. Subsequent defrost cycles will not be able to remove the large buildup of ice. Since the mechanism does not cope with its task, frozen water blocks the drain. 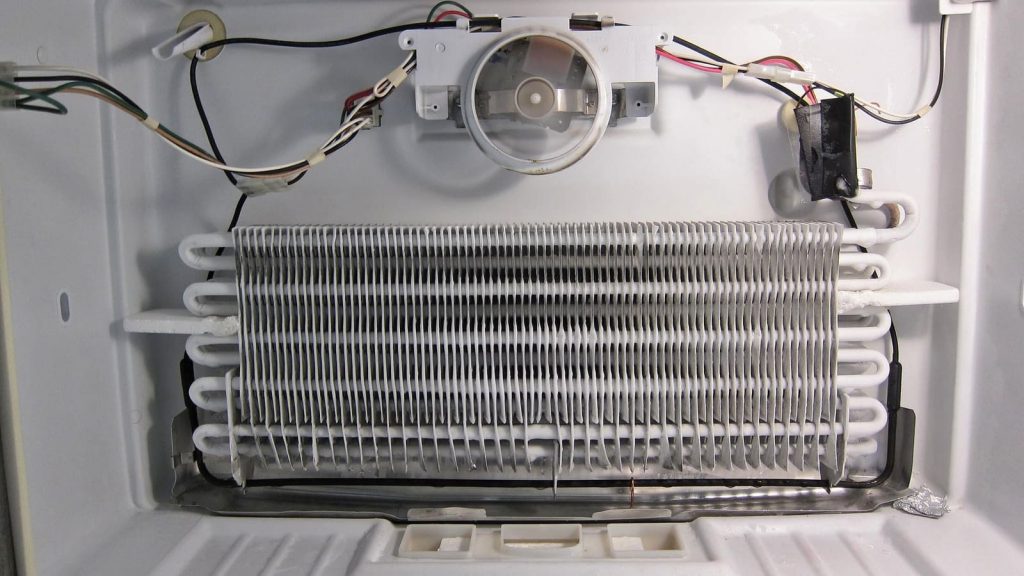 It is recommended to periodically check the condition of the drain until liquid forms under the refrigerator. Not timely removal of ice affects the operation of the part. Strong freezing gives a large load, as a result of which the drain becomes completely faulty.

Finding the source of a leak in General Electric refrigerators is not easy right away, especially when moisture is slowly forming. If you suspect a malfunction of a certain mechanism, it is recommended to place paper products (for example, towels) in the appropriate area. The level of leakage reaches different sizes, however, even the most harmless puddle can eventually lead to unpleasant consequences: flooding or short circuit of electrical equipment.