The more equipment in our apartment, the more difficult it is to deal with technical problems associated with its management. Today we will analyze the situation when the remote control stopped sending commands. The solution to the problem is to reset its settings. But how to do it?

Most remote controls are arranged according to a standard scheme, so the reset procedure can be carried out using approximately the same algorithm. The first step is to turn off the fan using the remote control.

Wait about half a minute. Then proceed directly to the reboot process. To do this, press and hold the OFF button for about 10 seconds. After performing these manipulations, most remotes will be reset.

In addition, the devices are always equipped with an instruction manual. The procedure is described in detail there. Even if you do not have this instruction, you can always download a copy. Now any information can be obtained by going to the official website of the manufacturer.

If the above recommendations do not work, then you should use the other tips given in this article.

Almost all modern ceiling fans are equipped with remote controls. Such a tandem is designed to provide ease of use and practicality. However, along with the obvious advantages, there are also some disadvantages. 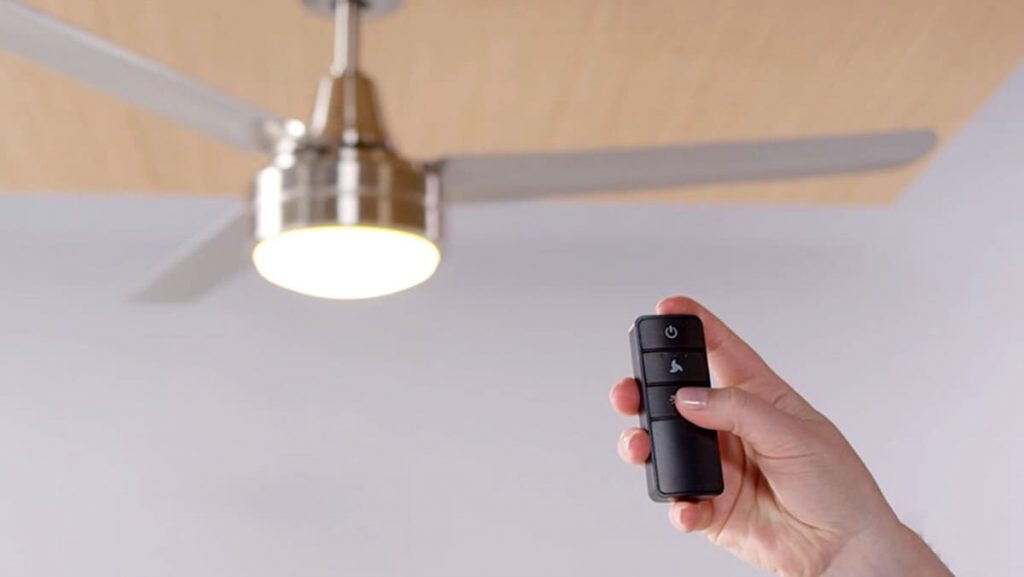 Sometimes owners of ceiling fans are faced with the fact that the remote control stops working at some point. At the same time, resetting its settings did not lead to the desired result. There are several most likely reasons why this situation may arise.

You are far away from the fan

Ceiling fan remote controls are not very powerful, so their range is very limited. It is possible that the fan does not respond to commands from the remote control due to the fact that you are standing too far from it.

In this case, fixing the problem will be extremely simple. Get closer to the fan and try again. If the guess is correct, the fan will work. Now you know that the power of your remote is not too great.

Batteries inserted in the remote are dead

The controllers require power to operate. It comes from batteries. Therefore, it is highly likely that the remote control has stopped working because the batteries are dead. It is worth remembering that low battery power significantly reduces the coverage area.

The solution to the problem is to replace the used batteries with new cells.

Do not throw used batteries in the trash. Dispose of batteries properly. For this, special containers are provided, which are most often installed in stores.

The ceiling fan does not follow the commands sent by the remote control if they operate at different frequencies. There is a technique that allows you to change the frequency of operation of these devices. This is done so that the fans located in different rooms respond to specific remotes. In this way, it is possible to avoid unintentional switching on of the device by a remote control from another fan. 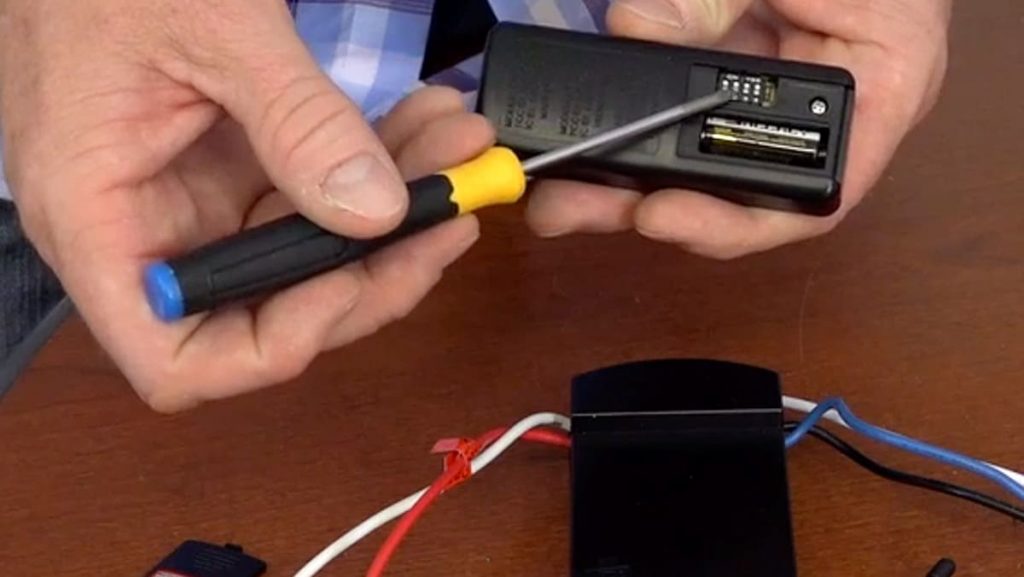 If you have already checked the range of your device, changed the dead batteries, then the next step is to check the fan settings. These manipulations will help make sure that the fan and the remote control from it are set to the same frequency.

When setting up, observe safety precautions. Follow the instructions supplied with the device. Also make sure the device is not connected to the network.

The remote control is defective

If all previous actions did not bring any effect, then most likely the remote control is out of order. In this case, you can proceed in two ways.

In the first option, you need to apply for a new device to the store where you purchased the fan, or buy it from the manufacturer’s online store. If the warranty period has not expired, and the remote control has failed through no fault of yours, then the seller must replace it for you free of charge. 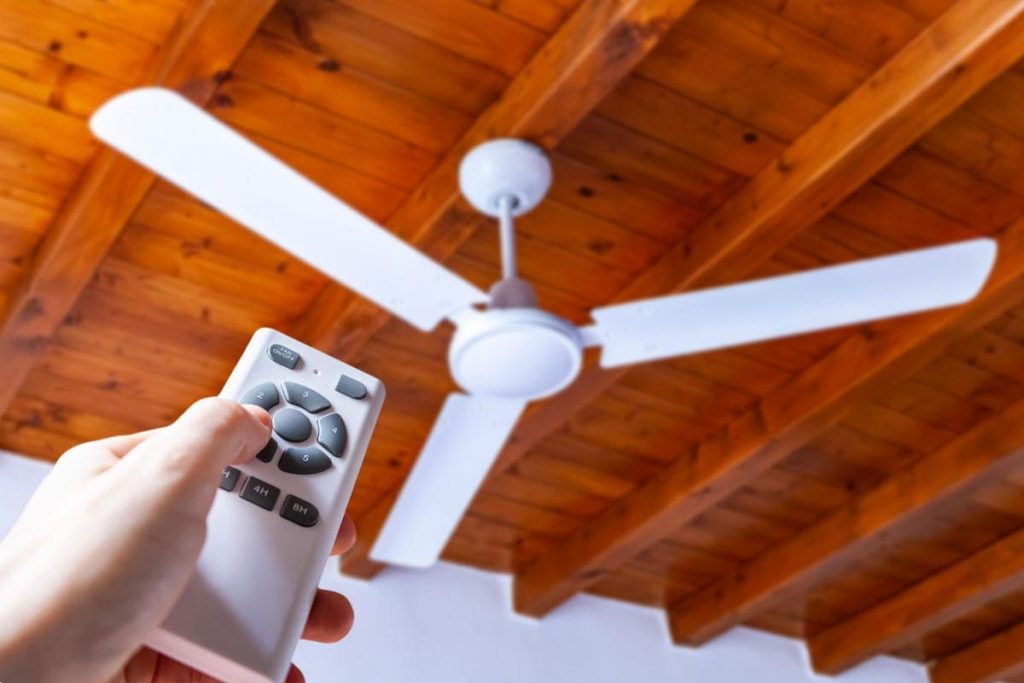 If the warranty has already expired, and you do not want to spend money on the original remote control, then you will have to resort to the second option. They will be the purchase of a universal ceiling fan control panel. They are much cheaper and easy to get. You can search for suitable options in online stores.

Some ceiling fans have recessed lighting. At the same time, owners of such improved models may face an outstanding problem. Sometimes the fan stops performing its direct functions, while the light continues to burn properly. This breakdown can happen for several reasons.

First of all, it is necessary to check the operation of the remote control and the wall switch. Make sure all settings are correct.

Everything is in order, but the blades still remain motionless. What is the problem? Most likely it lies directly in the fan.

The working light indicates that the power is connected. Therefore, it can be assumed that there are faults in the wiring or engine failure. No need to try to fix the problems that lie in electrical appliances without the proper skills and knowledge. Work with wiring is very dangerous, neglect of safety regulations can lead to electric shock.

The fan may stop working due to a loose connection inside. With active long-term operation, the wiring could move away, which causes breakdowns. 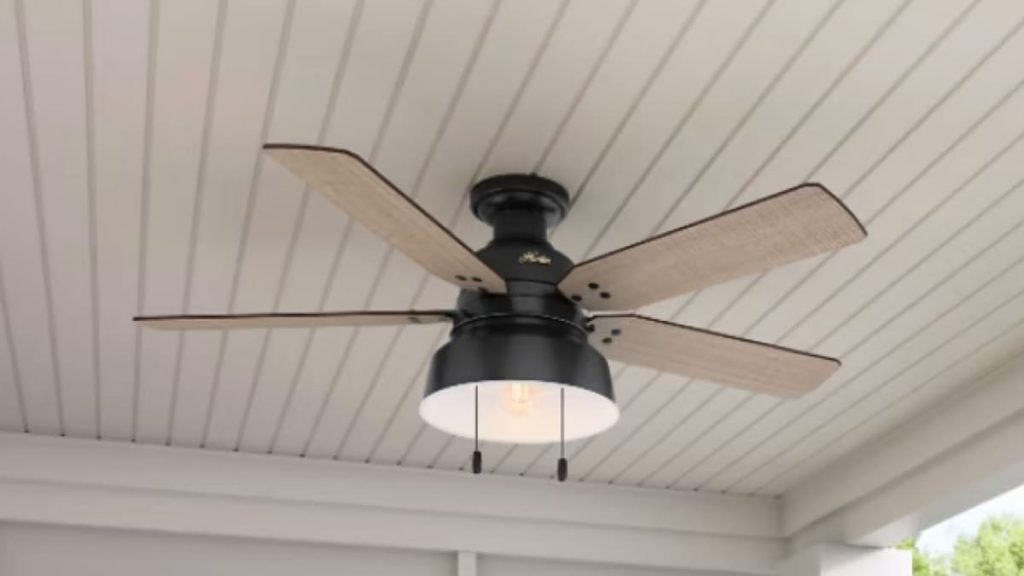 In addition, a malfunction in which the light in the fan continues to work may be hidden in a problem with the motor or capacitor. Voltage drops, mechanical impacts and other adverse factors damage the parts, making them unsuitable for further use.

The good news is that damaged parts can be replaced with new ones. However, this is not always possible to do on your own, you may need the help of a qualified specialist. He will quickly and efficiently repair your equipment.

Sometimes the entire block needs to be replaced. You have to calculate and choose the option that suits you.

Re-syncing the remote control with the ceiling fan

Pairing ceiling fans with a remote control follows the same process as pairing your smartphone with wireless headphones or other devices. Sometimes additional synchronization may be required.

There are some differences in this process specific to specific brands. However, the general scheme of steps will be similar. The first step is to turn off the fan using the wall switch. Let him stand still for about thirty seconds. After that, the fan must be turned on again. Depending on the brand of the device, switching on may occur in different ways. Some remote controls have a “pairing” button. You need to press it and the device will be synchronized. Everything is simple. Usually, all these nuances are indicated in the instructions for the device. 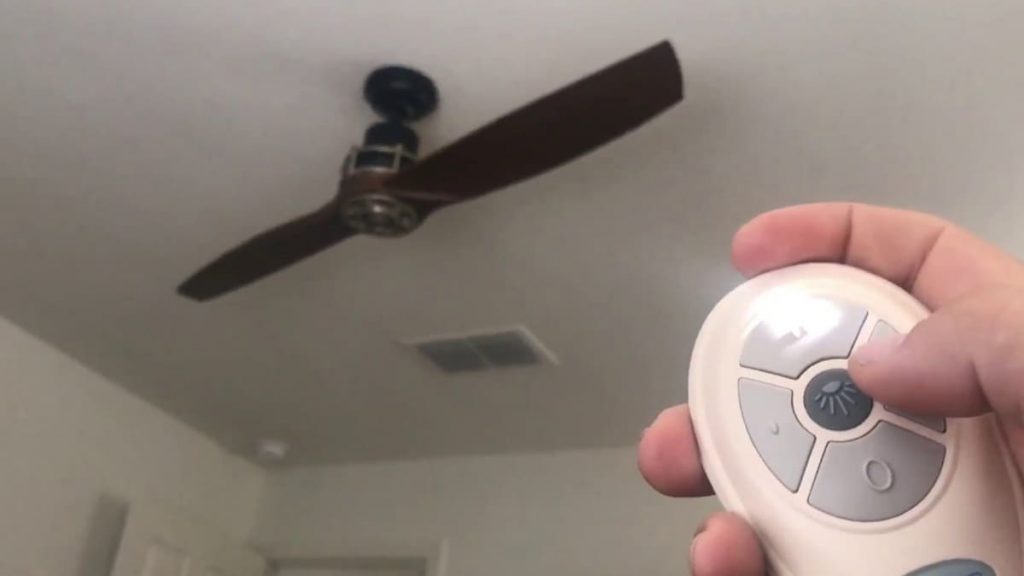 If there is no such button on the remote control, then the instruction will come to your aid again. It will describe in detail how to synchronize your particular model of ceiling fan and remote control.

Starting a ceiling fan without a remote control

What if the remote control fails and you need to turn on the ceiling fan? The solution to this problem exists. However, the activation methods depend on the specific model, as well as on the initial settings.

Usually, most models of ceiling fans are equipped with additional switching mechanisms. It can be a cord, a chain, and also a wall switch.

The most common option for additional inclusion. The element has a speed control knob, or is equipped with a slider type regulator.

If your model has a wall switch, then starting the fan without a control panel is not difficult. In addition, you can independently adjust the speed of rotation of the blades.

The second option for switching on will be to start the device through a cord or chain.

Manufacturers of ceiling fans equip them with a starting cord or chain. Thanks to these elements, the user gets the opportunity to turn the device on and off, as well as adjust the speed of its operation.

True, if the fan is installed too high, it will be quite problematic to use this method.

If the fan is not equipped with such a mechanism, then you can contact a qualified specialist who will eliminate this defect. 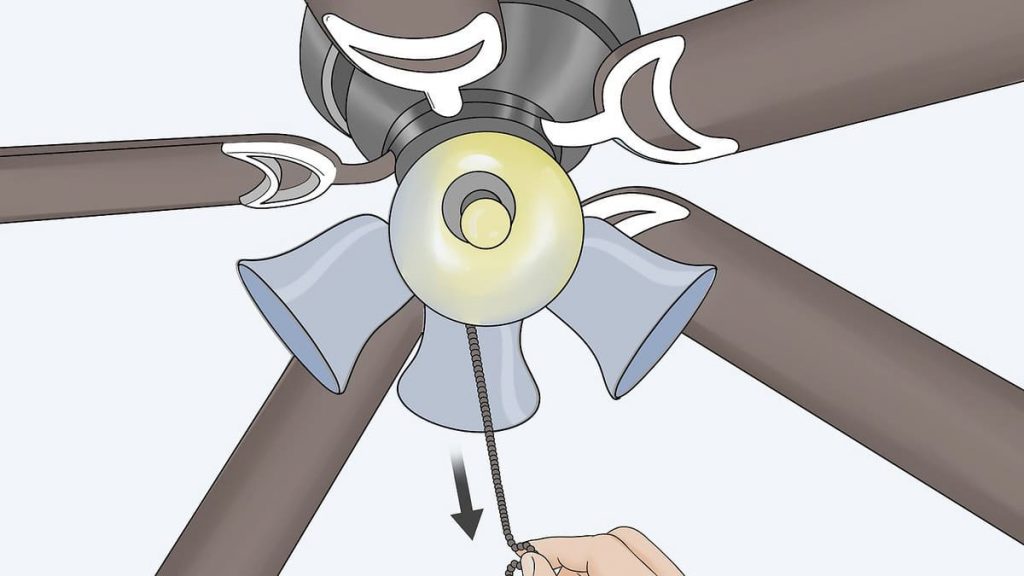 Using the universal remote control and how to sync it

Sometimes finding the original remote control for a specific ceiling fan model can be very problematic. Devices are discontinued, the original device is expensive, or searches in online stores have not been successful. What to do in such a situation? The solution is to buy a universal remote control.

These useful gadgets are produced by third-party manufacturers. Already from the name it is clear that the device should fit almost any model of ceiling fans.

Often these remotes are sold with a new receiver. That is why the owners of ceiling fans still have to perform a few additional manipulations in order to restart the device and use it comfortably.

You can buy a similar version of the remote control in local stores specializing in the sale of household appliances. In addition, now any item can be ordered online from anywhere in the world.

Do not be lazy and carefully read its functionality before buying a gadget. Information about which models the purchased device is synchronized with will be useful. Also read reviews from other buyers. You will not spend a lot of time collecting important data, but at the same time you can save money and not be disappointed in the purchase.

Pairing of such consoles is carried out according to the standard scheme. It is similar to the synchronization of the original models.

Turn off the device and wait approximately thirty seconds. Then find the “sync” or “pair” button, press it to establish a connection between the two devices. You must first install a new receiver to the fan. Without this, the previous steps will simply be useless.

How to stop Wi-Fi calling on the different smartphones

What does the PS4 controller light mean?

The Samsung server is not responding. How to connect with it?