All housewives are well aware that the dishwasher kitchen unit must always remain airtight during the entire process of work. If a leak is found, then it is simply inconvenient to work – dirt is sprayed in all directions, a puddle forms under your feet. We have to wipe the floors all the time, because a puddle can damage the flooring, spoil the kitchen furniture. But the most important thing is that a puddle will form every time the dishwasher is turned on. In addition, there is a danger of a short circuit in the electrical wiring of the house.

If water is leaking through the door of the unit, then several reasons can be assumed. This may be caused by air gap blockage. But most often the cause of the leak is a leaking unit door gasket, or in this case the drain of the washer is completely clogged.

Before you start repairing a faulty dishwasher, you need to find out the true cause of the breakdown. Carefully analyze all errors in the operation of the mechanism.

An air gap is not required in all dishwashers. This design prevents dirty water from returning to the dishwasher in the event of a blockage in the main drain. 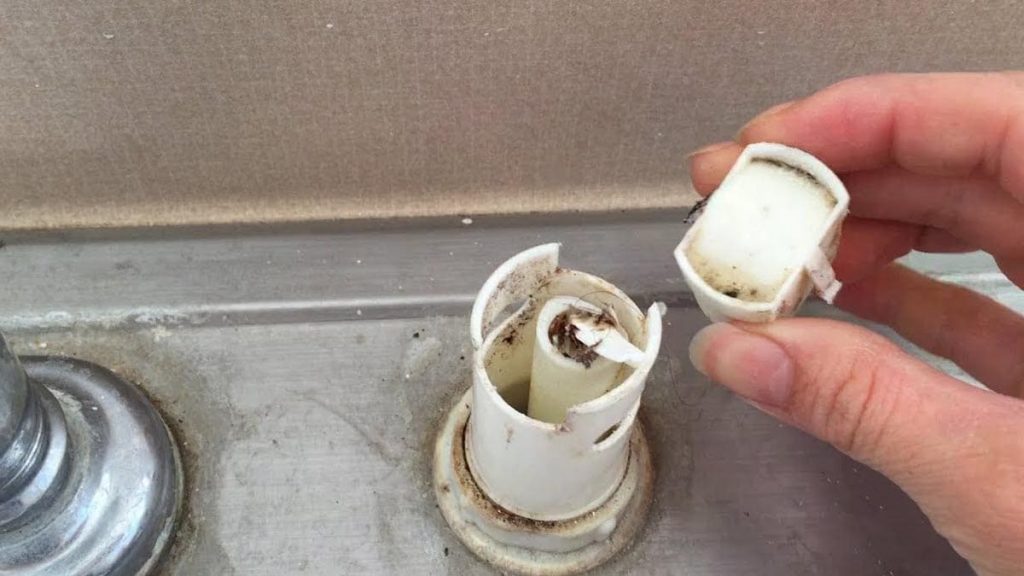 It is quite easy to determine the presence of an air intake in the unit, you just have to look into the sink. If the sink is equipped with a small fitting with holes near one of the taps, then the presence of an air gap is provided for in the design of the machine. But in case of clogging of the air gap, a flow of water from the unit is formed, moisture will flow through the door.

To cope with such a breakdown is not difficult if you follow the instructions:

This completes the cleaning procedure.

The sealant of the dishwasher hatch is a rubber band laid along the perimeter of the door. It is this structural element that ensures the tightness of the module during operation. Over time or for other reasons, the gasket may be damaged, causing water to leak from the unit.

Another reason for such a breakdown can be clogging with sharp-edged food debris that simply tears the gasket material. Or, over time, rubber abrasion is allowed during long-term use of the unit.

If the door gasket is simply saturated with dirt, then the problem can be solved by removing foreign matter with a piece of damp cloth. If all actions do not give the desired effect, then the gasket must be removed and replaced. You can do the operations to replace the dishwasher door gasket yourself. To do this, you need to do some manipulations:

If the dishwasher is leaking from under the door, then there is a possibility that the drain of the unit is clogged. Over time, food particles, detergent residues, and other debris get into the drain of the machine, which causes blockage of the drain device.

The door seal is not designed for long effective use, and water fills the machine with every dishwashing session. Over time, water may begin to pour out through the seal, and not through the drain clogged with debris. 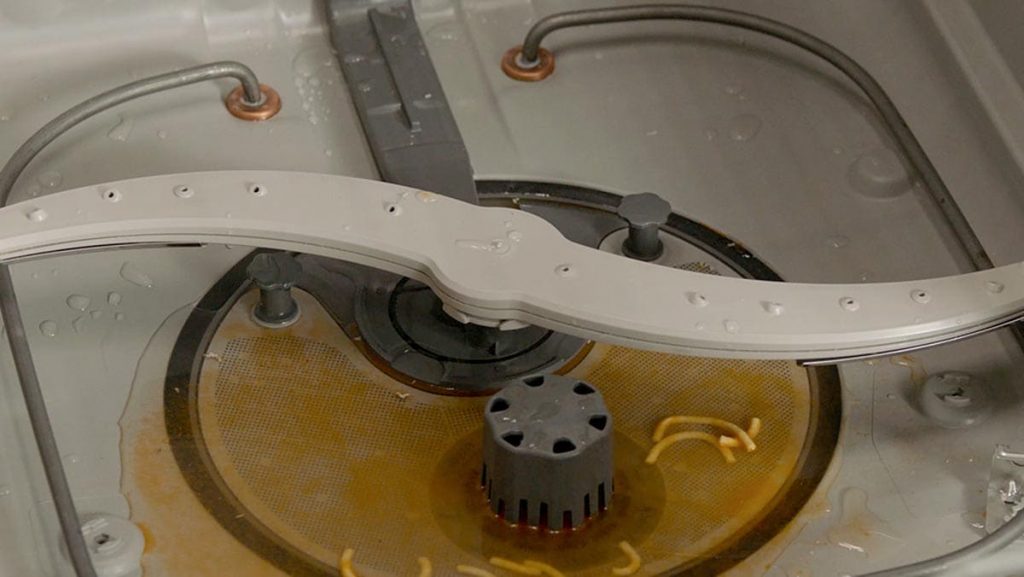 If the hostess determines that the drain hole is clogged, then it’s time to clean the drainage system. This can be done as follows:

In addition to the causes of leakage listed above, the use of harmful detergents can be the cause of a machine breakdown. At first glance, all liquids for washing dishes by hand or mechanically should be identical. But this is only an assumption. Actually there is a difference. And this difference lies in the foaming from one and the other detergent.

The use of a conventional slurry causes vigorous foaming. And the soap substance for washing in the car does not form such an amount of foam or there is no foam at all. Over time, the accumulation of excess foam will cause the gasket to lose its tightness and the water from the dishwasher will begin to pour out. Puddles form on the floor, and the process itself will become impossible to continue.

If the hostess has run out of all the means for the dishwasher, then you can try to do the following:

After these manipulations, the hand dishwashing detergent should clean the dirty dishes, and a small amount of baking soda will not cause large amounts of foam to form.

Sprayer out of order

The dishwasher is designed in such a way that when the appliance is operating, the spray arm must rotate and supply jets of water onto dirty dishes. But over time or under constant heavy loads, the sprinkler of the module may break, become clogged, etc. In such cases, water may leak in the unit

The reason for the breakdown of this element of the washing machine can also be the accumulation of excess foam on it. Or in the event that it gets stuck in the items of the table set loaded into the unit. 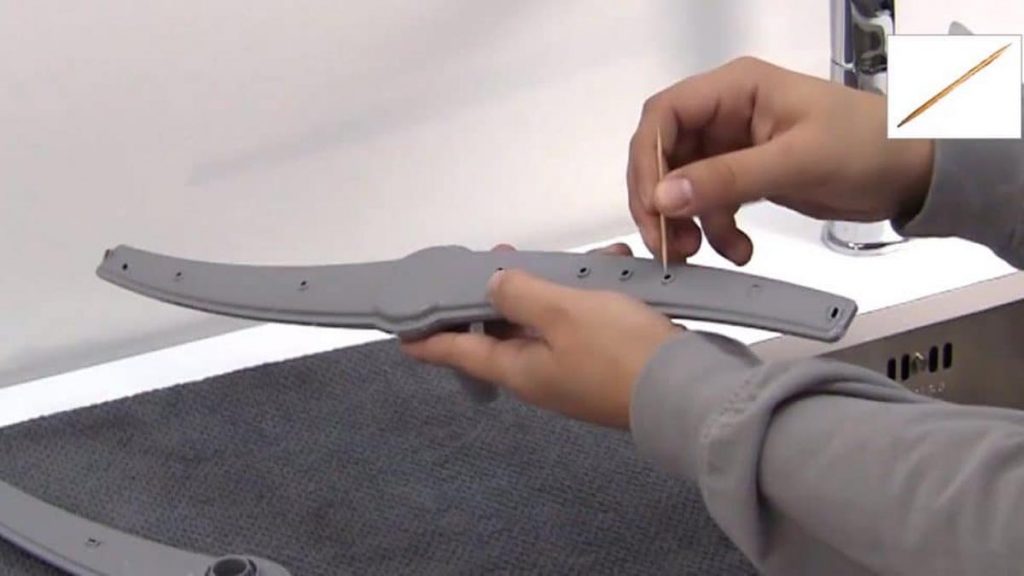 If the cause of the trouble is a clogged sprinkler, then the cause can be removed by simply cleaning this part of the mechanism. But in the event that the lever is broken or bent, simple cleaning will not help and you will have to purchase a new part. Replacing an old sprinkler with a new one is not a difficult operation. It is enough to unscrew the broken sprinkler that has failed and install a new one in its place.

Many dishwashers are initially equipped with a float mechanism, which prevents the dishwasher from overflowing with water. The mechanism consists of a float switch and the float itself. As the water level in the machine rises, the float rises along with the liquid. At the moment when the water surface reaches a pre-set limit level, the float causes the switch to work and the water supply stops. The module is considered to be completely filled with washing liquid.

But in those cases when the float mechanism becomes unusable, ceases to function correctly, the water supply does not stop and the unit will eventually begin to leak. Checking the operation of the float switch is quite simple with a multimeter. The device will show if the mechanism works continuously or stops the water when it reaches the full level.

If the float switch breaks, it will need to be replaced with a new one. But it is better to entrust this operation to a qualified specialist, since it is quite difficult to make repairs without proper skills. 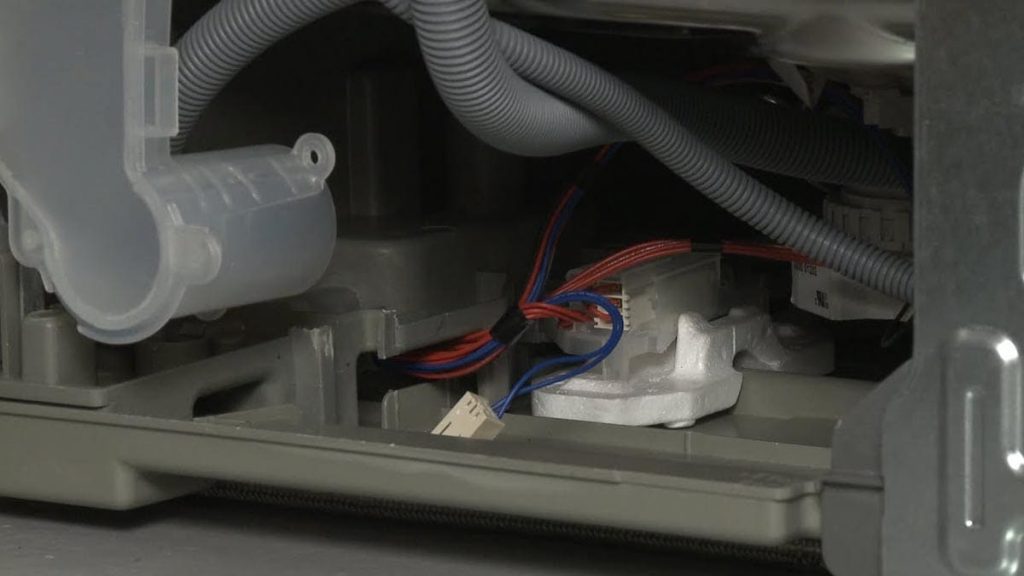 If you find complex defects in the operation of the machine, malfunctions, it is better to contact the services of a professional repairman for household appliances.

The water supply mechanism is designed to regulate the flow of liquid into the dishwasher. In cases where the valve cannot close, water will begin to overflow from the machine, leaks will form. 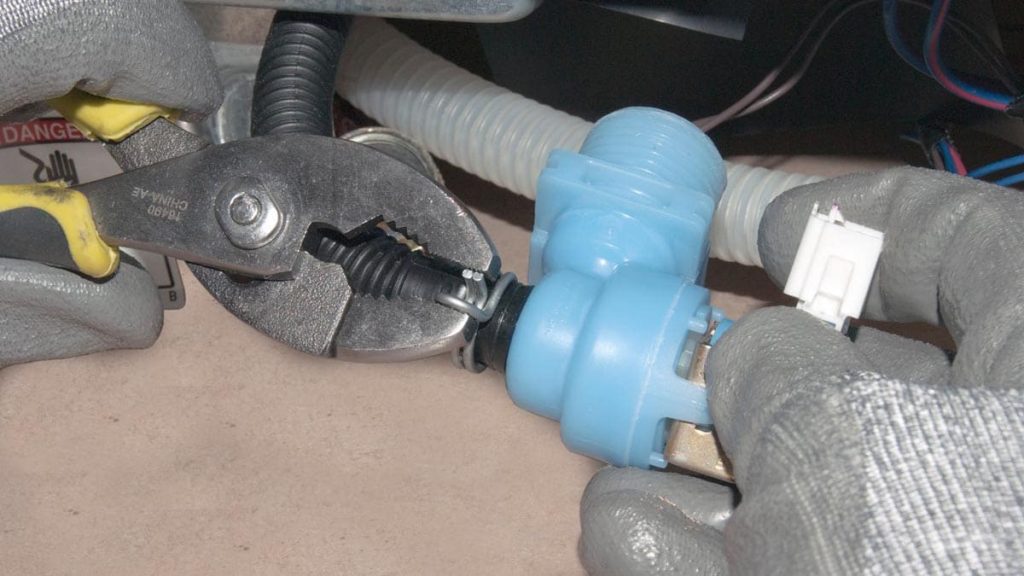 To make sure that the valve is working properly, it is enough to start the machine, and halfway through the working process, open the door a little. At the same time, the water supply to the unit must be stopped. If this does not happen, then the intake valve has become unusable.

This problem can only be solved by replacing the old faulty valve with a new one. Such work requires certain knowledge and experience. Therefore, it is better to entrust the repair to a specialist.

From the bottom of the dishwasher door leaking water