The compressor in the refrigerator is responsible for cooling air in the refrigerator. If you notice that this element began to heat up a lot, and an unusual noise appeared, we advise you not to ignore such “symptoms”. There are several reasons why the compressor overheating occurs. We offer to get acquainted with them, deal with the nuances and try to eliminate the problem of overheating yourself.

The temperature thermostat has broken

When the thermostat fails, it ceases to control the compressor, forcing it to constantly work, even when it is no longer needed. Since the compressor goes more than the load, it works without turning off, it begins to overheat. If you ignore the problem, the future will need to replace it, which is many times more expensive than replacing a thermostat. 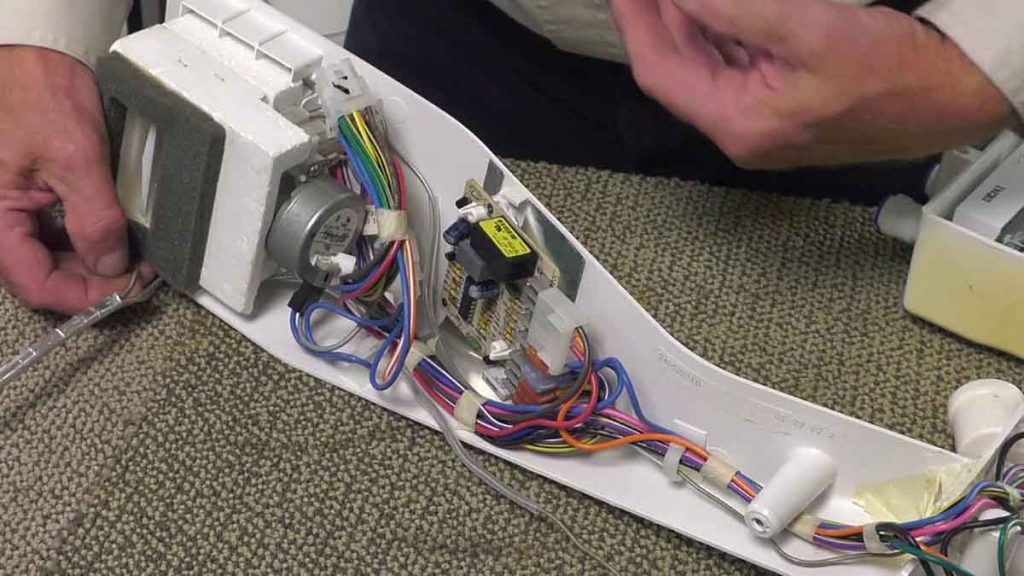 Why does not it work
In the refrigerators there may be an electric or mechanical thermostat. First you need to determine the type of this element to identify the cause of its breakdown. This can happen as a result of natural wear after long operation.
With an increase and decrease in temperature, many elements are expanded and compressed due to these changes, which also affects the duration of the parts. The thermostat case can crack and moisture falls into it. This leads to a breakdown, electronic thermostats are especially out of order.

How to fix
If the compressor overheating is caused by breakdown of the thermostat, it is most likely to be replaced by the part. If you are sure that you can do it with your own hands, then you will not have problems remove the old thermostat and install a new one. You can buy it on the Internet or in a specialized store. Previously, do not forget to turn off the equipment from the network. If you are not confident in your abilities, it is better to call a specialist so as not to aggravate the problem.

The system does not have a refrigerant

The cooling system works cyclically. This is a closed sealed element according to which the refrigerant moves. It passes through condensate, turns into a liquid, then through the evaporator, goes into the gas, so the temperature in the refrigerator is kept at the right level. The compressor is the “engine” of this refrigerant, forcing it to circulate according to the system.

In order for the refrigerator to work as it should, the system must have the required amount of refrigerant. Even with minor leaks, the load increases on the system, since the smaller amount of the refrigerant copes with cooling worse. As a result, the compressor begins to work more actively and overheats. 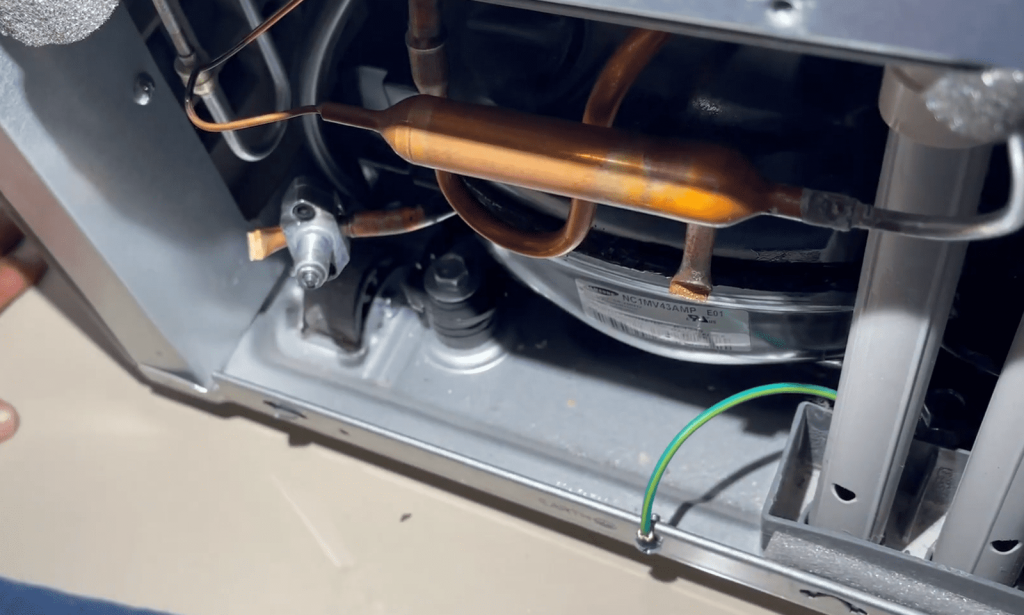 How to fix
Not everyone can solve the problem on their own. First you need to find the place of leakage of the refrigerant. It can be a single perforation or multiple. Next, you need to eliminate the slots in the system. The holes can be sealed or completely replaced by the system if it rustled greatly. After that, you need to refuel the system with the necessary amount of refrigerant and start the refrigerator. This work is within the power of professionals. Using special equipment, using knowledge and skills, the master will do everything quickly.

Do not try to refuel the system yourself. Working with gas gases can be dangerous for your health. Such work is carried out in compliance with safety precautions, using specialized equipment, using knowledge and skills.

Why does not it work
One of the most common reasons why the fan fails is dust and dirt. When dust accumulates on its blades or in the engine, garbage gets, this increases the load on the fan engine. Soon he fails.
Checking if this is so simple enough. You need to push the refrigerator from the wall, try to turn the capacitor fan with your hand. If he is stuck, most likely a problem in dust and garbage, if not, then a malfunction in the engine itself.

How to fix
The capacitor fan can be replaced or replaced on your own. If the problem is in the garbage and pollution, then you can sprinkle the parts carefully, treat it with a thin, not hard brush for hard-to-reach places. Before starting work, turn off the equipment from the network.
If the problem is in the fan engine, then you need to replace the component. You can check the engine using a multimeter. If you smell Gary, most likely the engine burned out. The replacement can be done independently or entrusted the work of the master. At least you will already know what exactly leads to overheating of the compressor.

Natural wear of the compressor

The compressor makes the refrigerant circulate according to the system. Over time, after many years of operation, it wears out. The work takes place with a large load on the nodes and elements of the refrigerator to simply maintain a given temperature level inside the chamber. The process is accompanied by increased heat release and the compressor begins to overheat, buzzing louder than usual. 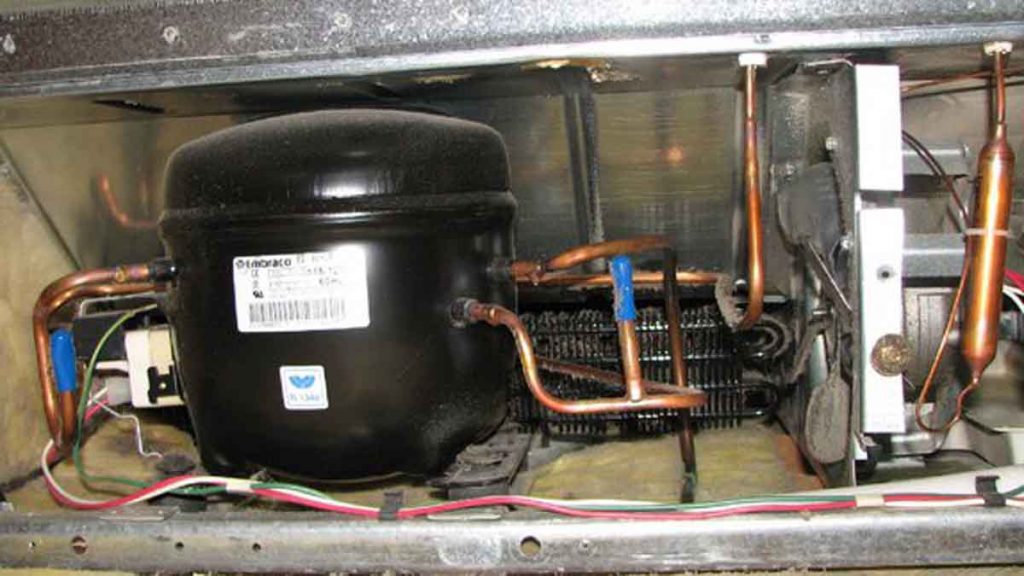 Why does not it work
In addition to natural wear, the compressor may become unusable for other reasons. For example, too large or too small amount of refrigerant in the system.
When there is a lot of gas, then too high pressure appears in the compressor. This loads the components in excess of the norm and leads to rapid wear and subsequent failure. When there is not enough, the compressor has to be more actively and longer drive a refrigerant to lower the temperature in the refrigerator to the desired level.
Another reason for the quick compressor wear can be contaminated or frozen coils. This leads to blockage of the system and a refrigerant can get back into the compressor. Because of this, it will simply break.
The refrigerant must flow smoothly along the coils and the entire system. If something prevents gas, its level is lower or higher than the norm, then measured circulation through the system is excluded.

How to fix
If the reason is the amount of refrigerant, then for an adequate load on the compressor, you need to bring it to the norm – add or remove gas in the system. If the cause is in the clogs, then you need to clean or replace the coils. It is better to entrust these manipulations to the master, since working with a refrigerant can be dangerous to health.

The refrigerator stands on the sunny side

The layout of the kitchen does not always allow you to place a bulky refrigerator in a suitable place for it. You can not install the equipment so that direct sunlight falls on it. This leads to overheating of the equipment, an increase in the load on the system and nodes. Accordingly, this leads to overheating of the compressor. Sunny rays can also directly warm the compressor and interfere with its adequate operation.

Why does not it work
The compressor’s task is to cool the temperature in the refrigerator and remove heat. If the refrigerator “bathes” in the rays of the sun, he has to work more diligent and bask. The overload leads to the rapid wear of parts.

How to fix
The easiest way is to rearrange the refrigerator in a suitable place where there will be no many sun. If the layout does not allow you to move the technique, then you can install a sunlight barrier on the window from the refrigerator. It is also important to make sure that there is enough space around the refrigerator so that the air flows freely flowed in the equipment and help to remove excess heat. 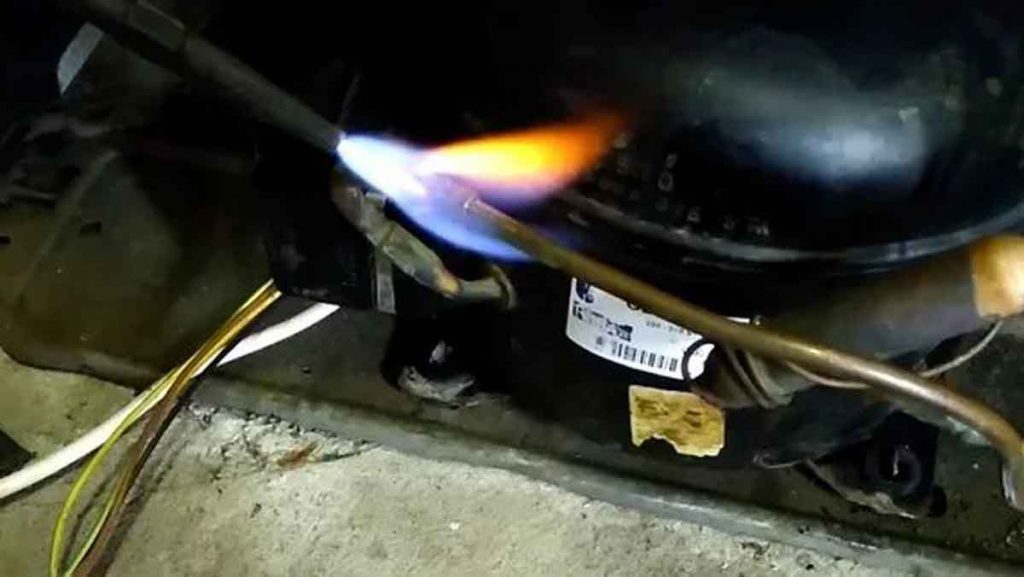 The compressor is a very important element of the refrigerator. As you already understood, overheating can occur for various reasons. In any case, you cannot ignore the problem. If you notice that overheating occurs constantly, then try to quickly find out the cause and eliminate the malfunction.

You can use our tips and recommendations to “diagnose” the refrigerator, find out the reason. Many may even correct a breakdown with their own hands. If you are not sure that you will be able to eliminate the malfunction yourself, it is better to trust the work for specialists. It is especially dangerous to work with refrigerants, as they can be dangerous to health.

Do not forget to control the work of the refrigerator. Overheating, unusual noises, hum and other signs can talk about breakdown or some problem that will necessarily lead to breakdown.