The washing machine can effectively rotate the drum at a wide variety of speeds, depending on the purpose of the current tasks it performs. This is directly related to the fact that the processed linen must be constantly shaken and contaminated water must be drained from it.

When going through the spin cycle, the drum spins very quickly, but quietly. If his work becomes too audible, then this state of affairs indicates a malfunction. In order to urgently determine the cause of its occurrence, it is necessary to identify the source of the noise.

During operation, the motor of the machine is capable of making a rattle, creak or knock, the appearance of which can be provoked: 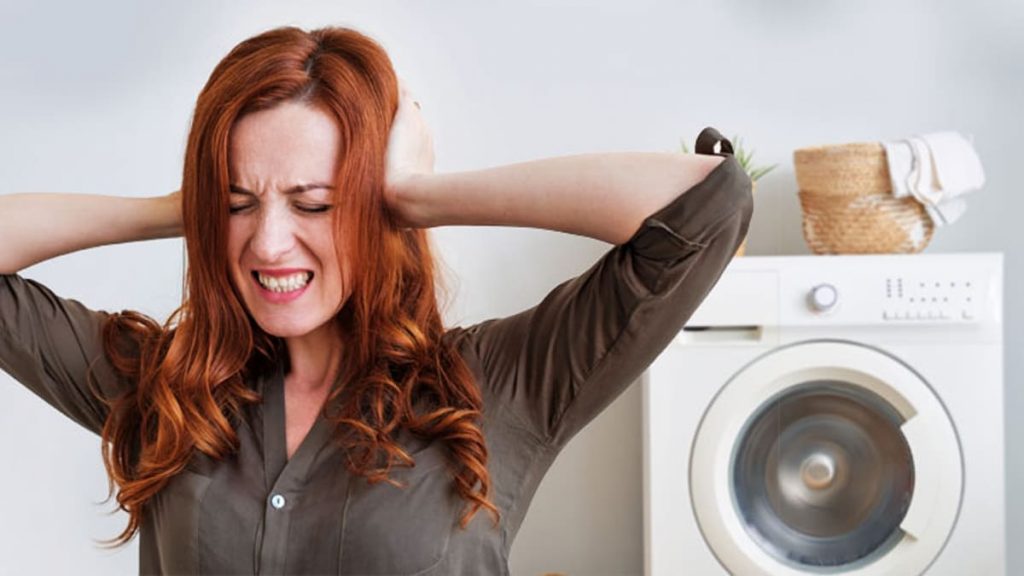 Causes of noise during washing

During their normal operation, any units emit a variety of sounds of varying degrees of intensity, but too much noise is usually not observed.

But a broken household appliance during the spin cycle can work with very loud noises. Their characteristic (creaking or knocking) often indicates the source of the problem.

Usually, pronounced interference during the operation of equipment is heard as a result of: 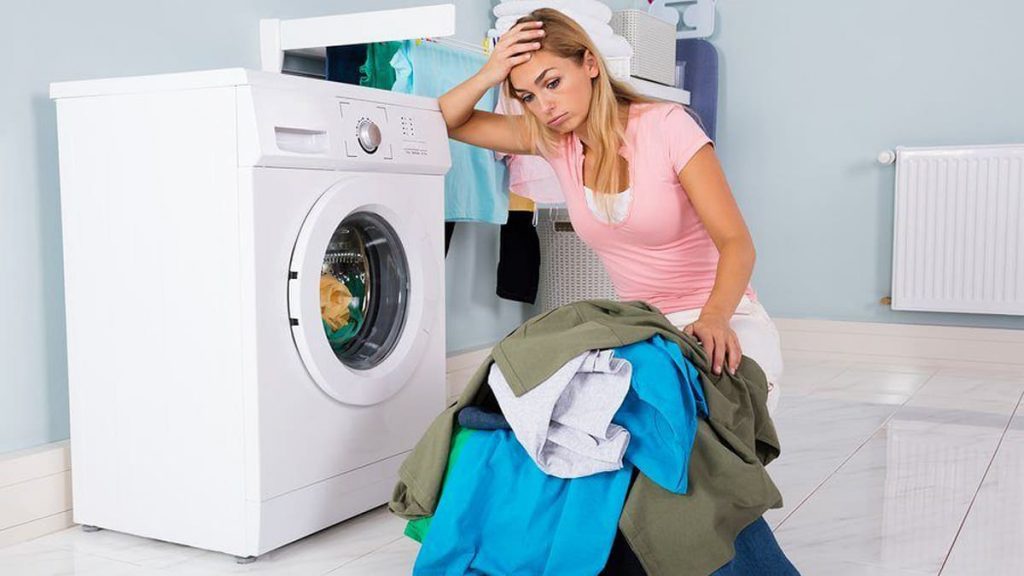 In order to quickly and accurately detect existing problems with the operation of the washing machine and find the source of the observed noise, you first need to check the most obvious reasons for its occurrence. At the beginning, it should be established that the sounds are not heard as a result of incorrect distribution of the laundry unit over the space. If it is folded unsuccessfully, then problems will begin during the operation of the household appliance.

Most often, the owners of equipment load things into it without regard to balance. Placing a very small or large amount of clothing and loading large items, blankets or curtains, can lead to a lack of normal distribution. It leads to a knock in the drum, which will begin to swing and beat against the inner surface of the frame of the washing machine. Then a loud knock is heard, which is most felt during the spin cycle.

A similar problem is due to the fact that in this case the drum is spinning at maximum speed. And her solution is to achieve a balance inside the machine of the pawned items every time you wash.

If the load is too low, add a couple of towels to increase the overall weight and balance the unit. If there are large items such as curtains or sheets, you must use a program designed for bed linen. During spinning, it slows down the rotation of the drum, and the use of the correct mode of operation of the household appliance will protect it from impacts with a loud knock. 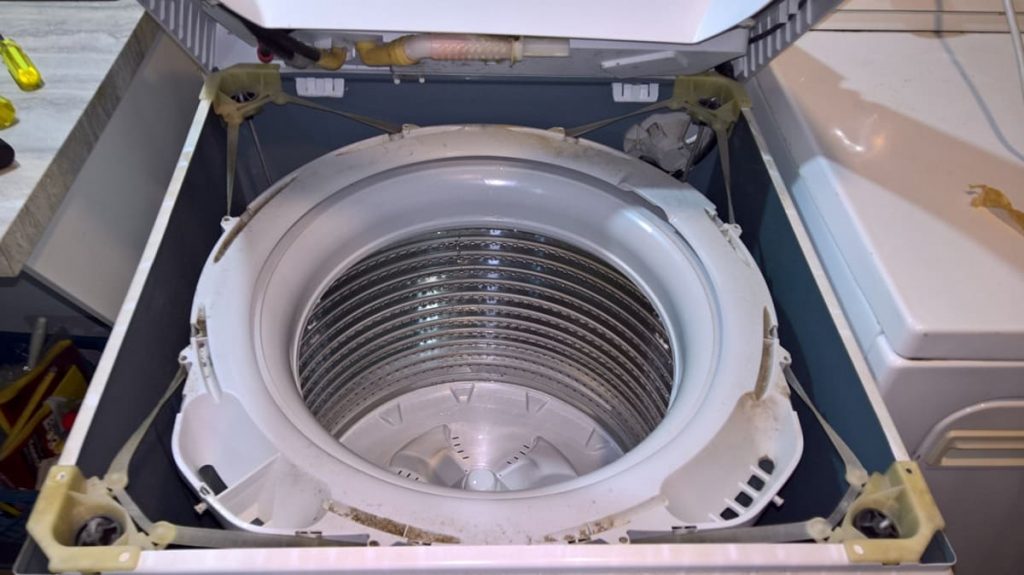 The drum of any model relies on certain support to ensure its free and silent rotation.

The type of the corresponding device is related to the type of technology. Suspended roads are used to support units with vertical loading.

These supports ensure that at maximum speed the drum runs without much noise while maintaining balance. But it can occur during spinning, when the part is spinning very quickly. The explanation for this phenomenon lies in the fact that the support in the form of shock absorbers or suspension rods wears out or fails.

Then the drum will be out of balance and start to beat against the frame or other components of the inner surface. As a result, a loud knock will be heard, which is not only annoying, but can also damage the equipment. 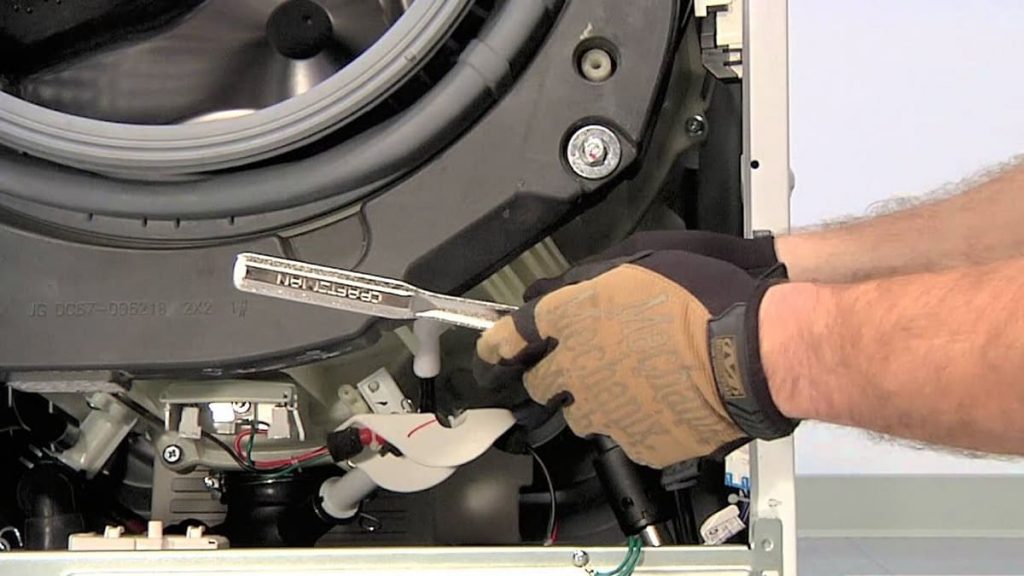 Therefore, if the washing machine emits it, it is urgent to disconnect it from the network and start looking for the problem that has arisen.

Worn or damaged shock absorbers or suspension links require the replacement of these parts, which cannot be repaired. It is desirable to remove and install new ones all at once, even if only one element is worn out. If the only shock absorber or suspension fails, then the turn of others will soon come up. Therefore, in order not to carry out repairs again and again, it is better to do it at a time. It should also be borne in mind that such structural elements are sold as a kit for simultaneous replacement.

When installing them, you need to remove the machine panel and gain access to the supports, which should be removed and replaced with new ones.

The part in question is a very important structural element of the unit, which allows you to completely drain water from it and remove it to the outside through a hose. 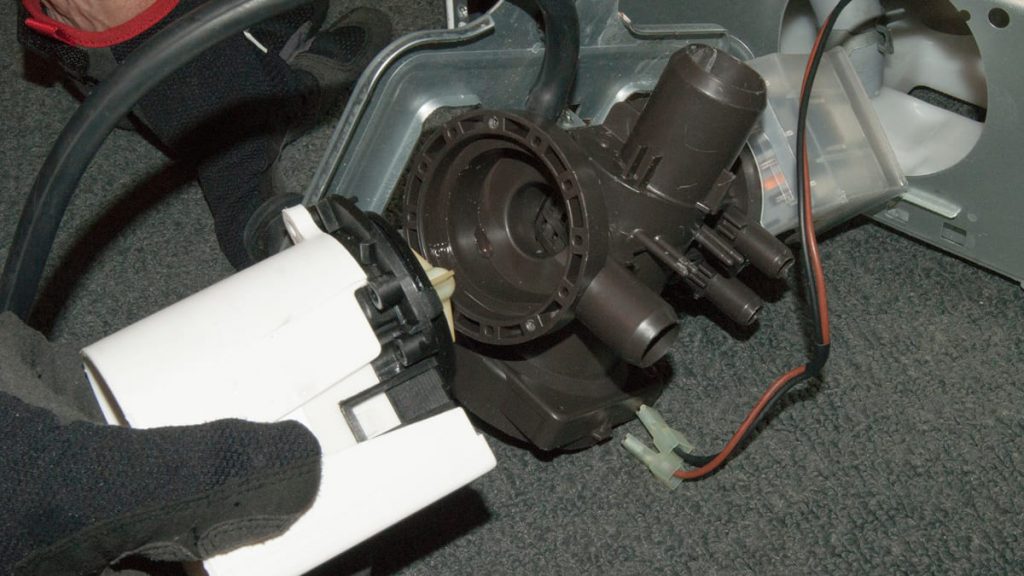 The pump turns on several times during the cycle, if necessary, drain the used fluid and replace it with clean fluid. The last time the function is carried out during the spin cycle at the very end of the wash. Then the drum spins at a very high speed, reliably removing excess moisture from things. At the same time, the drain pump is turned on to drain water from the device.

A slight creak during spinning is considered an absolute norm. But an increase in its intensity indicates a problem with the pump. It is equipped with moving parts that rotate to pump water out of the washing machine. Therefore, a resounding rattle indicates that the broken part touches its internal parts.

The drainage cannot be repaired, so the only way out of the situation is to replace it.

Worn drum bearings: loud creaking or noise when the engine is running

The design of any machine provides for the presence of bearings that help the drum spin smoothly and quietly. Therefore, even when it reaches high speeds, no special noise is heard during the spin cycle.

These parts are located behind the outer drum. Their internal composition includes rollers or balls rotating in a metal ring frame. 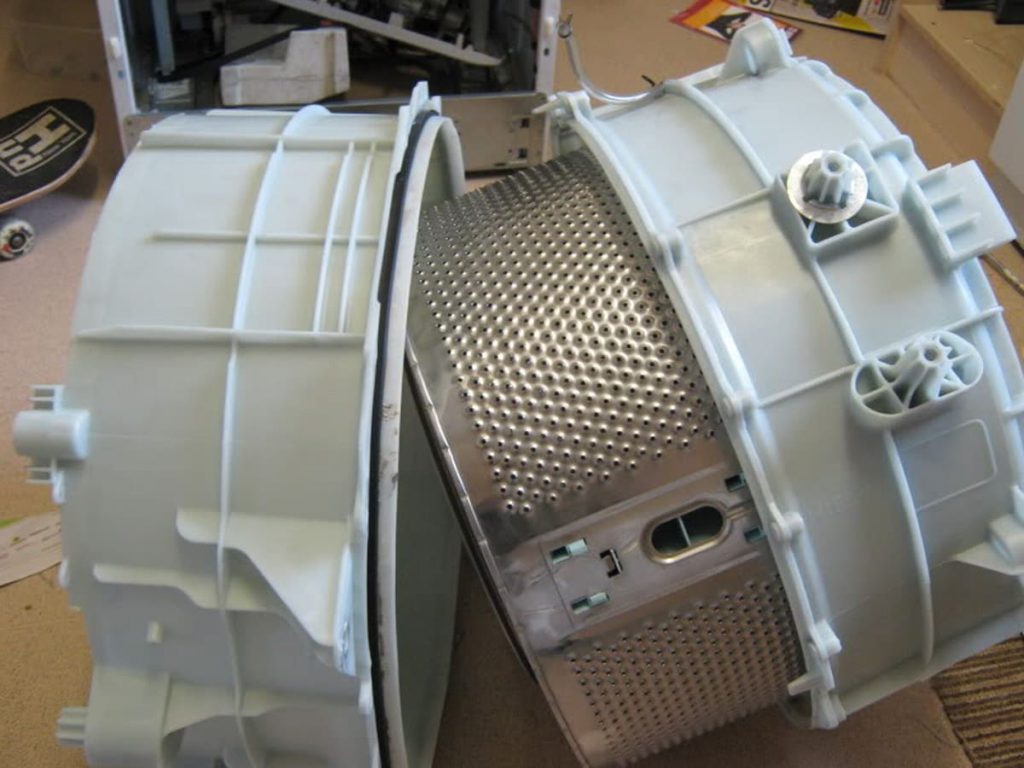 Top-loading and front-loading units from any manufacturer are equipped with bearings. Usually they wear out due to the development of their service life. Then the parts just stop working smoothly. They will try to straighten their position, resulting in loud grinding noises.

In this case, they need to be replaced depending on the type of household appliances used. In some cases, it is possible to confine ourselves to replacing only the tank bearings. But some types of appliances need to update the external bath, in which the parts are built.

Here is a list of the most frequently asked questions about loud noises that can be heard during the spin cycle.

How do you know if the bearings are out of order?
Their obvious malfunction can be judged by the variant and the change in the intensity of the noise emitted by the washing machine. Usually, when it goes through the spin cycle, in this case, there is a rattle or the sound of a running motor. Most often, the owners of the unit notice that it becomes louder depending on the acceleration of the rotation of the drum and subsides as it slows down.

How safe is it to operate a household appliance with worn bearings?
If the bearings fail, the equipment is allowed to be used. But it is better to postpone washing for a while, as the drum is not able to rotate smoothly and speeds up the motor too much.

Is bearing repair worth it?
They can be repaired, especially in cases where the machine has not been used for too long. But if it works for more than ten years, then its service life is already limited.
End-of-life bearings only open the cycle of problems that the owner of the old unit will begin to face. Therefore, it is better, without delay, to purchase a new one.

How much does it cost to change bearings?
Usually the total cost of these parts and their repair fluctuates in a fairly wide range (150 -260 $). It is directly related to the peculiarity of the brand of the household appliance and its specific model, as well as the complexity of the total amount of work.