During the operation of most washing machines, you can hear some noise. But there are a number of sounds that should not be heard during its operation. These include a loud clang during the stirring cycle. It is necessary to understand why it occurs.

If this sound is heard during the operation of the machine, then first of all you need to check if it is overloaded and if something is stuck under the agitator. If nothing like this happens, then you should examine the condition of the pulleys, look for defects in the clutch assembly of the gearbox and check the safety of the drive belts.

The fight against unpleasant sounds during the operation of equipment is not simple, but quite feasible. You just need to read the recommendations presented here and find effective ways to fix the problem.

If the washing machine makes a clang when stirred, you must first find out the causes of this phenomenon and eliminate them. 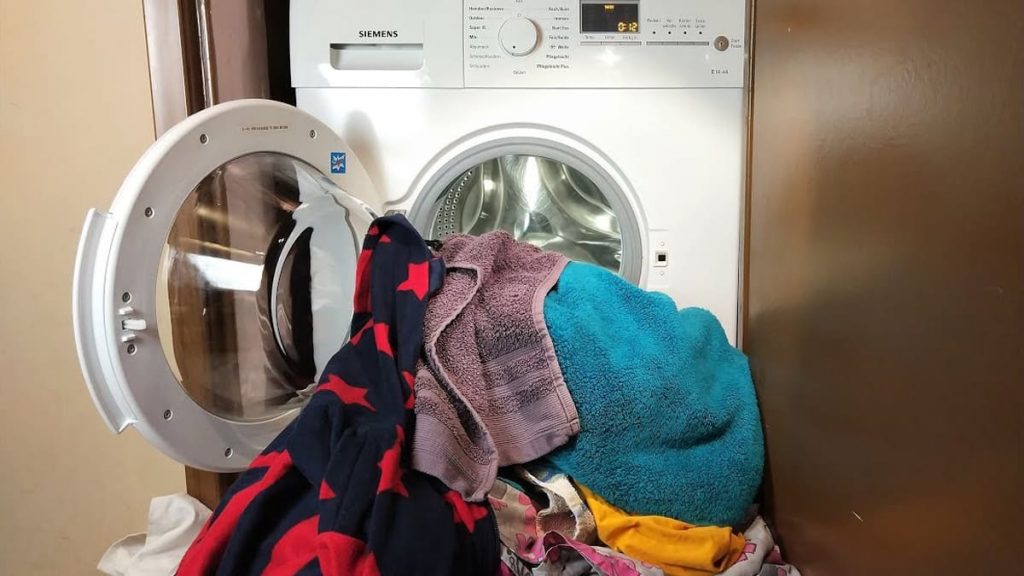 When searching for the main reason for the occurrence of unpleasant sounds during the operation of equipment, you need to be patient. You should start by checking those things that are easy to check and, in the absence of any damage, no longer take into account.

The most common is overload. If there is too much laundry inside the washing machine, the drum will have to handle more weight than it was designed for. Its belts, pulleys and other components will also work with stress. This will provoke the occurrence of clanging and creaking during the mixing process.

It is quite possible to avoid such a problem. First, you need to carefully study the instructions for the machine, which always contains information about the maximum allowable weight for it.

If the manual is lost, then it is worth remembering the most important rule: do not load the unit too tightly. The total volume of things placed in it should not exceed ⅔ of the maximum capacity. All things that go in there in excess of the specified volume will be superfluous. Then, during the mixing cycle, unpleasant sounds will be heard.

If the owner of the equipment is convinced that it is not overloaded, then he needs to check the condition of the agitator.

It is not part of the drum, but is a separate component. Manufacturers place it behind or below the drum, securing it with bolts. Therefore, a small gap remains between him and the stirrer. During the washing machine’s agitation cycle, small items of laundry sometimes get caught in there and get stuck. During rotation, they touch the surrounding parts of the unit, which causes a loud clang. 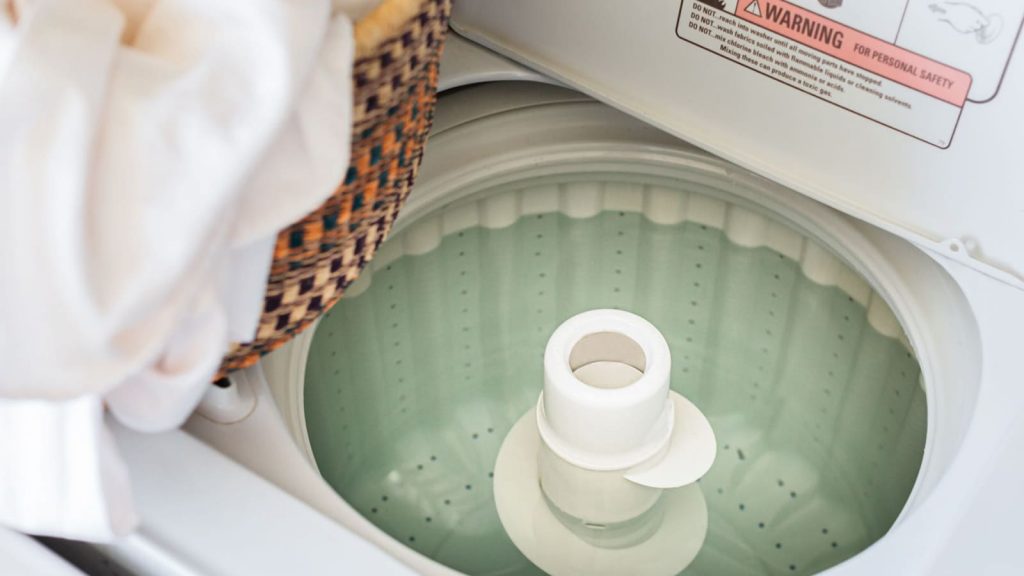 Such a problem is solved quite simply. It is necessary to remove the agitator and remove the stuck object. A number of recommendations should also be taken into account.

Strange sounds are often heard with significant belt wear. In most designs of modern washing machines, a belt is provided. That is, they are arranged in the same way as previous models. When their engine starts to generate energy, the specified part rotates. She, in turn, is sent to the drum of the unit and its other working parts.

Manufacturers most often make washer belts from the black rubber used in regular tires. They pass through tensioners and pulleys, providing a tight fit to the engine and other rotating parts. 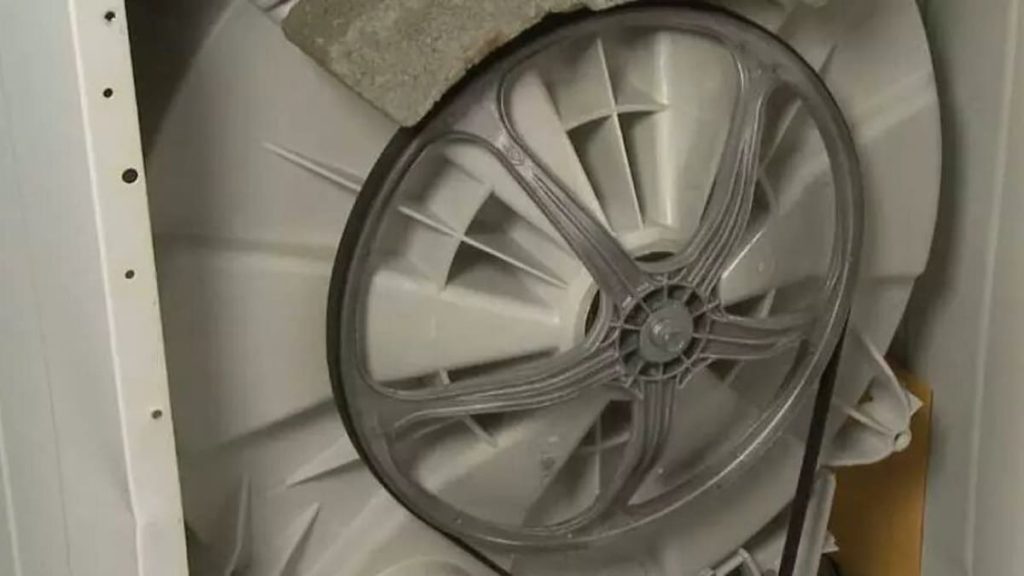 But gradually the washer belt of the device wears out, and its base ages, becomes loose and breaks. When it ceases to be functional and loses grip, a creak occurs. Such sounds are especially pronounced during the mixing cycle.

Then the natural way out of this situation is to replace the part. It is quite easy to make it. First you need to get to the belt. The best way to access it is by removing the back panel of the washing machine. Then you need to press the tensioner. Then it will be possible to quickly remove the old part and put a new one in its place.

As mentioned above, the washer belt is connected to one or more pulleys that help keep it taut. They also help straighten it out. It is they who often creak with pronounced pollution or in cases where there are any defects in their structure.

In order to check the condition of the pulleys, their need for cleaning or damage, it is necessary to remove them from the machine. But first you need to remove the drive belt in the same way as in the previous cases.

In order to carry out such a process, it is required to follow a certain algorithm.

Deterioration of the clutch assembly

In some cases, a noticeable creak can be emitted by a worn clutch assembly, which is an element of a gearbox or transmission. The coupling ensures the functioning of both the tank and the agitator.

Therefore, if the node gets old, it most often starts to work with unpleasant sounds. They are usually distributed during the implementation of the mixing cycle.

Therefore, it is very important to have an idea of ​​​​how to change this part. First of all, it is necessary to remove the washer transmission for subsequent replacement of the clutch assembly. 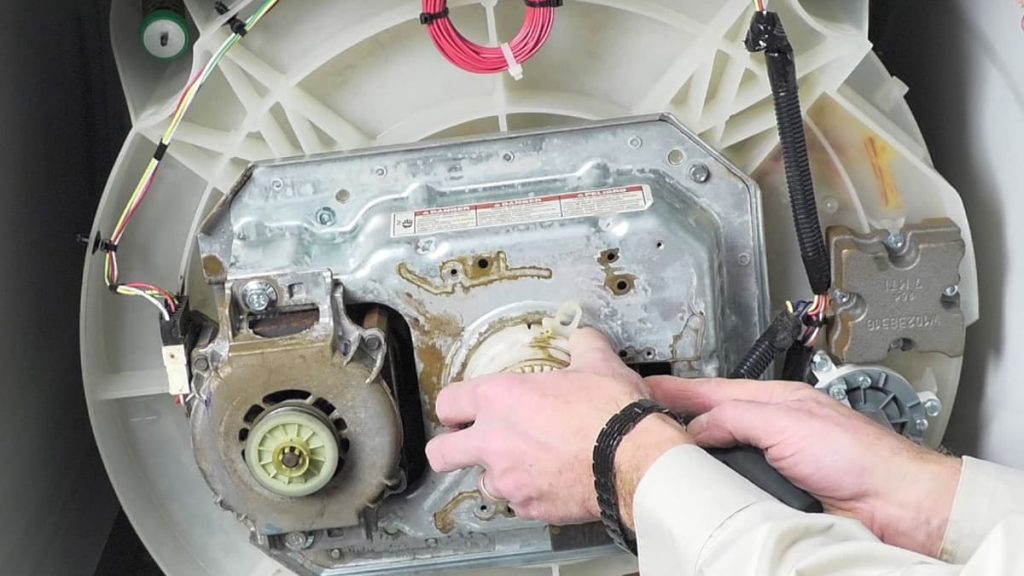 This job is often difficult because the gearbox is a large integral component of the device. Therefore, when repairing, it is often necessary to have a person who will hold it during repair.

Remove the support ring and thrust washer to release the clutch. After access to it is provided, it is required to replace the part with a new one.

It is necessary to answer some of the most common questions about troubleshooting breakdowns that cause unpleasant sounds during the operation of the washing machine.

What is a mixing cycle?
It is a stage in the implementation of the standard program. Its essence lies in the fact that the mixer makes a certain number of revolutions from side to side. As a result, the machine cleans the laundry from dirt, giving the wash a finished look.

By what signs can you determine that the unit is working properly?
This is easy to guess during the respective wash cycle, when the agitator moves back and forth a certain number of times. As the process progresses, it will be noticeable that the clothes are mixed with water and powder. Gradually, the liquid inside the device becomes dirty.

How to determine if the agitator is broken?
The most obvious sign of a malfunction of such a part is its immobility. It usually rotates back and forth many times during the mixing cycle.

Should the agitator be loose?
On new models, the stirrer is slightly loosened. Manufacturers try to make it fluctuate a little. This feature helps protect against damage.
But the owner of the washing machine must constantly monitor the condition of the stirrer bolt. It should be firmly fixed to avoid swinging.

Code E11 is displayed on the Electrolux washer