The Speed Queen brand is known in the world of domestic and commercial laundry machines. This article lists common breakdowns and how to fix them.

The list of the most common problems includes breakdowns:

It is reassuring that every problem can be solved without a global effort. So, let’s look at some of the breakdowns.

If the machine does not drain the wastewater according to the established scheme, then a breakdown or defect may lie in the drive belt.

This component is one of the important components of the washing unit. In order for the washing to take place without delay and with due efficiency, the drive belt must interact closely with the engine through a series of pulleys. Whatever function is performed – drying clothes, removing dirt and stains – the drive belt should work flawlessly.

The engine, through a drive belt, transmits a certain power to the tank of the washing unit, which causes the drum to rotate during the entire specified work cycle.

For normal operation of the belt, sufficient belt tension is required to transfer torque from the engine pulley to the drum. Over time, the elasticity of the element deteriorates, which can no longer provide sufficient tension.

As a result, the function of draining water is not fully performed. This is especially noticeable when loading a large amount of clothing or linen. Due to the low belt tension, it is impossible to squeeze out all the moisture from the load and drain it from the tank.

Outdated drive belts that have become unusable should be periodically replaced with new elements. The whole replacement process can be divided into 2 stages: opening free access to the belt and his replacement.

If the washing machine has a vertical loading scheme, then the belt can be found at the bottom of the unit, where access is impossible without removing the panel with its fasteners. Instructions for this difficult process can only be given by the management of the manufacturer or the administration of the supply store. 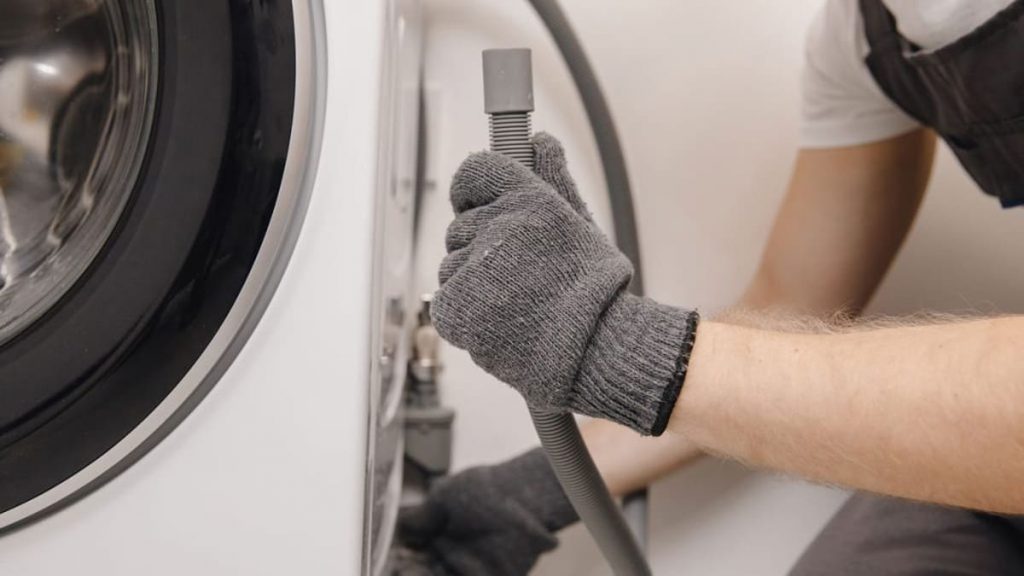 When the position of the drive belt, its condition can be accurately determined, you will see that the old removed element looks much worse than the new one installed in its place. This is due to the wear of the material during the entire period of operation. In order for the installation to be carried out correctly, it is necessary to wrap the end of the belt around the drum pulley, and the other end around the motor pulley. After such an operation, turn the washer to align the element on the pulleys.

This is another common problem that can occur with the Speed Queen washing machine. If there is not enough water entering the drum, then there are 2 possible reasons:

The inlet valve of a washing machine is a device by which the amount of water supplied to the tank is regulated. When it is opened, water evenly flows into the tank. After the water level reaches nomu, the valve closes automatically.

The machine’s timer functions as the brain of the machine. It controls the operation of all nodes in different operating modes – from loading laundry to draining waste water.

After selecting a cycle or mode of operation, the timer begins to manage the process at all stages of washing, spinning, draining.

Let’s say the valve is faulty. Then it is not fully open and the amount of water that is necessary for a full-fledged effective wash will not enter the tank. If the timer has become unusable, then the valve may not open at all, which means that water will not flow into the tank at all. In this case, the washing process is simply not possible.

Both of these devices – a uniform water supply valve and a process control timer – are quite difficult to repair on their own. The best way out is a complete replacement of the elements. To change devices, you should directly contact the user manual office, where you can easily place an order for new copies.

To make sure that the old timer needs to be replaced, it is necessary to carefully inspect it from all sides for signs of burns, odors, and other damage.

Before proceeding with the inspection, prevention, repair, troubleshooting, be sure to disconnect the washing machine from the power supply. 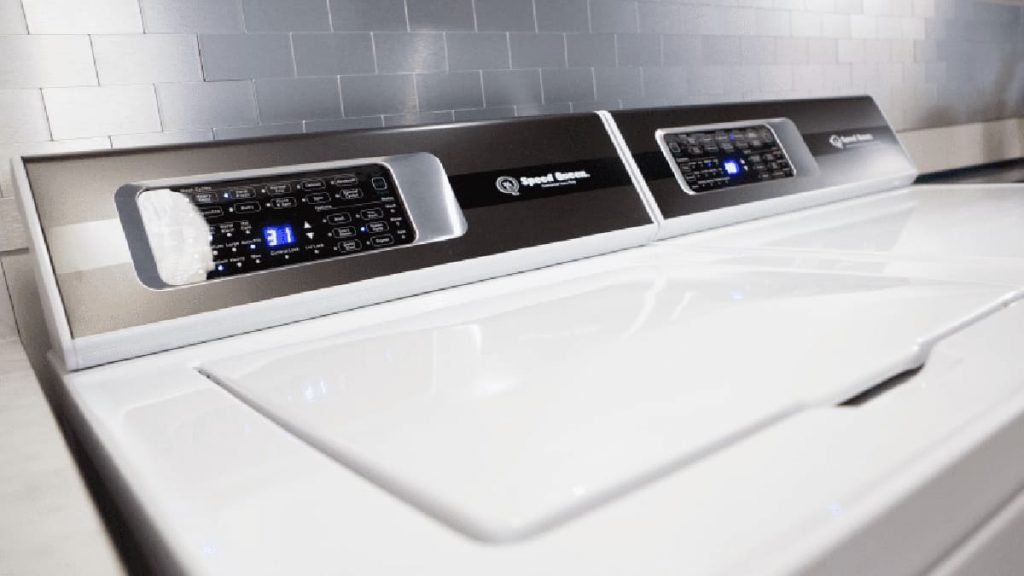 The inlet valve in many models of washing machines is fastened with screws and a special mounting plate. These elements must be dismantled. But first of all, it is necessary to remove the electrical connectors and de-energize the unit. And only then can the faulty inlet valve be replaced. At the end of the whole process, you need to connect, assemble everything in the reverse order. Outdated fasteners, bolts and nuts are also best replaced with new ones.

To easily inspect, remove the water supply valve, you should always shut off the water supply. A soft cloth should be placed under the device to collect the remaining water in the system. It is better to start maintenance by removing the panel. Then it will be possible to freely determine the state of all the main nodes and elements.

When rotating, the working elements of the washing machine do not gain enough speed

The usual rotation of the drum does not ensure the full efficient operation of the unit. The drum must rotate along the axis at a certain speed. In some cases, the element of the washing machine is spinning, but does not gain the required number of revolutions. The reason for the defect may lie in the vibration sensor.

The washing machines are equipped with sensors that determine the correct balance of the unit. If the limit of permissible vibration is exceeded, then consequences are possible that adversely affect the entire unit or its individual parts. In the event that the sensor detects excessive vibration, it automatically gives a signal and the washing machine reduces the speed, which does not ensure full operation in the washing mode. The ideal speed will not be reached.

Washing machines of the Speed Queen model are most often equipped with fragile, unreliable wiring from the sensor to the engine itself. The problem of electrical wiring also affects the sensor itself, which leads to a slow speed of rotation of the drum and insufficient operation of the unit in general.

You can fix the problem by carefully inspecting the wiring. If cracks, breaks, integrity violations are detected throughout the cord, then the wiring should be re-soldered or replaced with a new one to ensure the continuity of the connection.

In the middle of the entire cycle of work, the Speed Queen machine interrupts work, stops

In some cases, users find the unit stops working in the middle of a mode. The cause may be a malfunction of the tank cap or lock. As a rule, such a malfunction is observed when the machine is running at the fastest speed, when the degree of vibration is highest.

The lid lock or switch is designed to securely close the door during operation. The meaning of this is simple – if during the included wash or spin cycle the user decides to open the lid, the machine will immediately interrupt work and stop. This is to ensure safety, to avoid possible injuries. 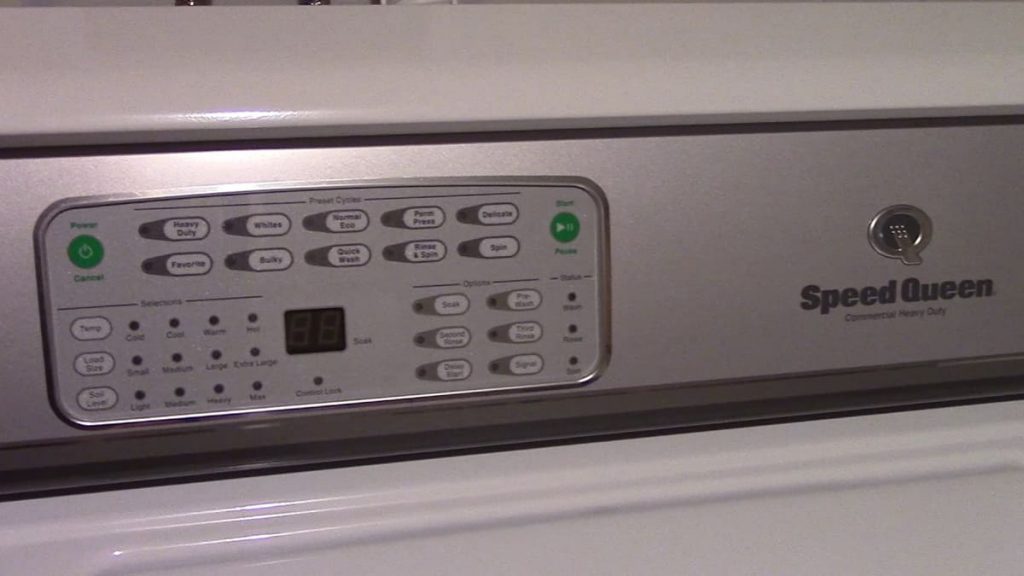 In addition, the switch must stop the operation of the washing unit if one or more components or mechanisms fail. Most often, such a stop can be observed during the spin mode. In this case, the drum picks up the highest speed and the vibration intensifies.

To solve such a problem, it is enough to change the outdated switch to a new node. It is easy to get to it after removing the main panel.

It will take some time to replace. It is enough just to disconnect the connectors, unscrew the fixing bolts. Assembly should be carried out in reverse order.

When changing one of the parts of the unit, also replace the fasteners with a new set of screws and bolts.

Increased noise during the operation of the Speed Queen washing machine

Excessive noise inside the unit during operation is not such a rare occurrence. Most often, a screech, rattle is heard when the drum rotates. Noises can be caused by a drive belt or a pulley.

The unit belt is designed to connect the electric motor to the pulley. The latter is located on the axis of the tank (drum). It is through the belt connection that the engine power is transmitted to rotate the tank.

The pulley is constantly in motion, which leads to wear. Due to constant operation, cracks, chips, breaks form on the surface of the pulley. It is these defects that lead to the appearance of noise, rattle, squeal.

To check the pulley for defects, just manually turn the element and listen to the sounds. If noises are clearly audible, then it’s time to change an important part.

It is better to purchase a new pulley with a kit that includes a tension belt and rollers. Replacing parts yourself will take a lot of time and effort. First of all, the machine must be disconnected from the network, remove the panel, dismantle the old belt. Then remove the pulley by unscrewing the bolts. After removing the old assembly, the worn pulley should be replaced with a new one. Assembling all the mechanisms in the reverse order will not take much time.