There are a lot of reasons why the dishwasher leaks when it is not turned on. Before proceeding with its repair, it is necessary to make a correct diagnosis.

Most often, the problem is a malfunction of the water supply valve or its level sensor. Sometimes the drain or circulation pump wears out, the door seal is damaged, problems arise in the area of ​​the switch motor seal.

Any of these problems is solved in an individual way in accordance with its nature. For this reason, the owner or user of the system must clearly know and understand exactly what the problem is.

List of common faults for devices of different brands

Leaks even when turned off

This problem is widespread enough, and it is serious. In this case, it is very problematic to carry out a full diagnosis. Sometimes the problem is in the water supply valves or in its reverse flow. And sometimes we are talking about a stuck valve in the open position due to calcium deposits. How does this lead to leakage? It’s simple, in this case, the water that should enter the system directly from the water supply cannot be controlled, as a result, it overflows. 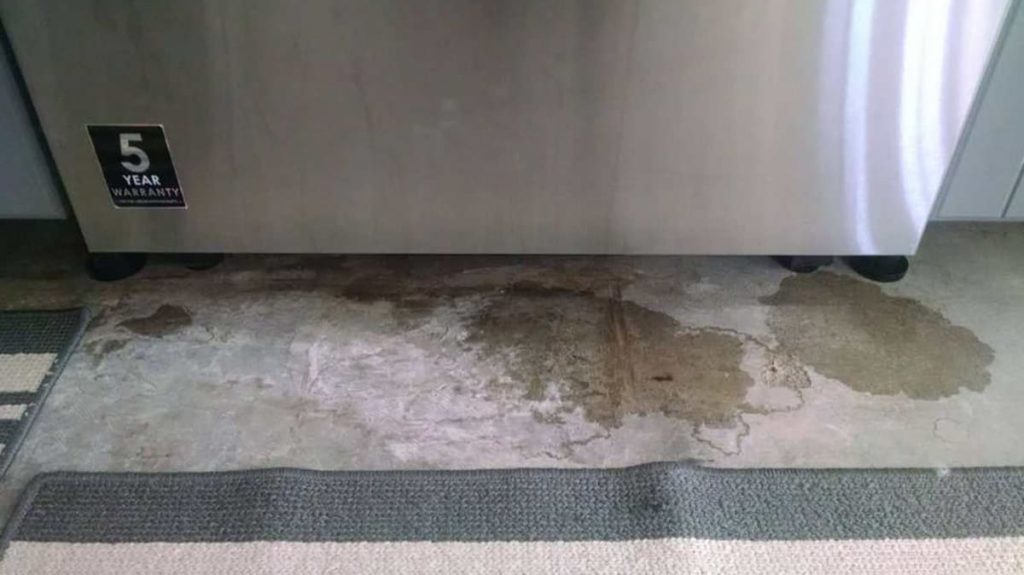 Another difficulty may arise when contaminated liquid enters the device from the drain line through the drain hose. Here we are talking about the return flow and the problematic valve. So, if the owner or user notices that his unit is leaking even when it is turned off, this problem can be solved by replacing the valve.

You can’t clean it, you will definitely need to install a new element. All you need to do is find the part in the catalog according to the model number of the dishwasher.

A similar situation applies to the check valve on the drain hose. If it is damaged, repair is impossible, you will have to buy a new element and put it in place of the old spare part. If the device has been found to be leaking even when it is not working, the problem could also be the drain hose, which usually lies flat under the sink, allowing the liquid to flow back into the device again and hold it until excess and leak. All that needs to be done in such a situation is simply to put a new hose over the drain line.

If there are leaks in the Kitchenaid machine

It is unlikely that anyone will like this state of affairs. In some cases, leaks are associated with the problem of the circulation motor with the most affected elements. It could also be a failure of the shaft seal, impeller or seal kit. You can try to replace the entire pump or motor assembly as soon as you suspect a leak in the Kitchenaid system. But taking into account the colossal financial expenses, it will first be possible to conduct a rational diagnosis, and then remove the main cause in the motor. 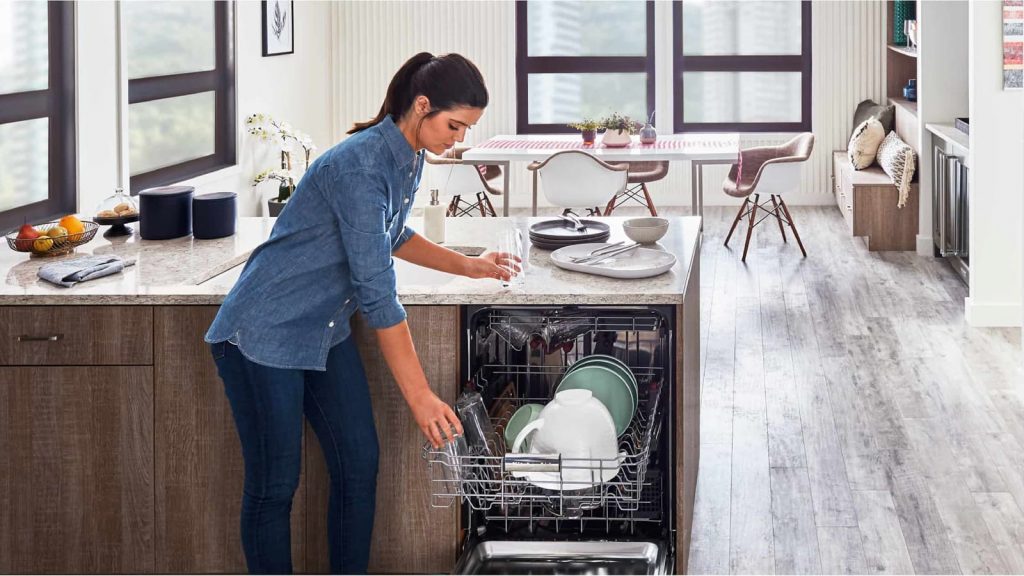 Leaks in the Maytag system

A common problem is leakage at the bottom of the door when turned off, at least this is what so many users of this brand complain about. In the lion’s share of situations, the matter is damage to the door seal. If the leak takes place at the bottom of the device, this often indicates a leak under the tank. Sometimes it’s the drain pump or fluid supply valve.

Another common problem with Maytag dishwashers is a worn gasket on the latch that closes the soap dispenser. It leaves a small space under the latch so that the water can drain completely during the operation of the device.

To solve the problem, it is necessary to check the bottom of the door for features such as gaps, tears or cuts directly on the seal.

You will also need to conduct a simple test. So, you will need to close the door with a dollar bill to make sure that its contact is of high quality. After the repair, it will be possible to carry out a similar tool with a banknote, and if the contact is good enough, then everything is ready. 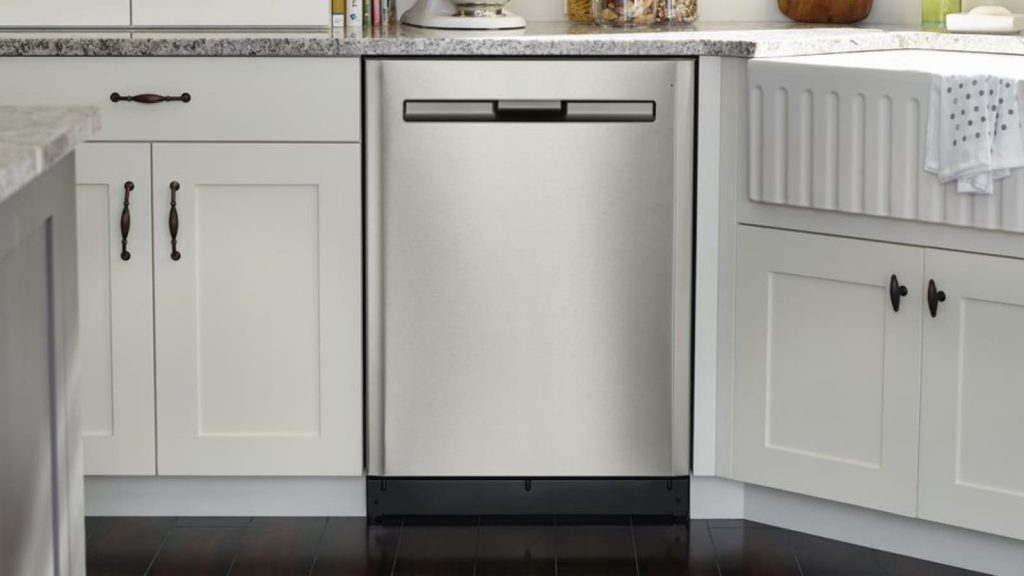 Leaks in a Whirlpool brand device

In the case of a machine of this particular brand, the problem most likely affects the motor part. However, it will not be difficult to check the seal of the switch in the off state. It wears out the fastest, which leads to leaks throughout the motor area. The specialist will first make a recommendation to determine the original cause of the problem that led to the leak. This is an extremely important step in solving the problem that played a role in the engine failure. It is believed that such a step will help prevent any problems and difficulties in the future.

Most often, this phenomenon is preceded by damage in the engine compartment. To solve the problem, it is necessary to take care of the convenient and comfortable operation of the unit in advance. Various approaches are taken to troubleshoot problems. Most often, this is a change of the entire pump and motor assembly. But given the fact that the cost of this event would be enormous, alternative approaches should be considered.

So, if a leak appeared in the bottom in the off state, the first step is to check the drain shaft seal for local leaks. In this case, everything will indicate that the cause of the leak is the impeller and seal. It is good that in this particular situation there will be the possibility of saving on cost by replacing the impeller and seal set without depending on the drain pump. 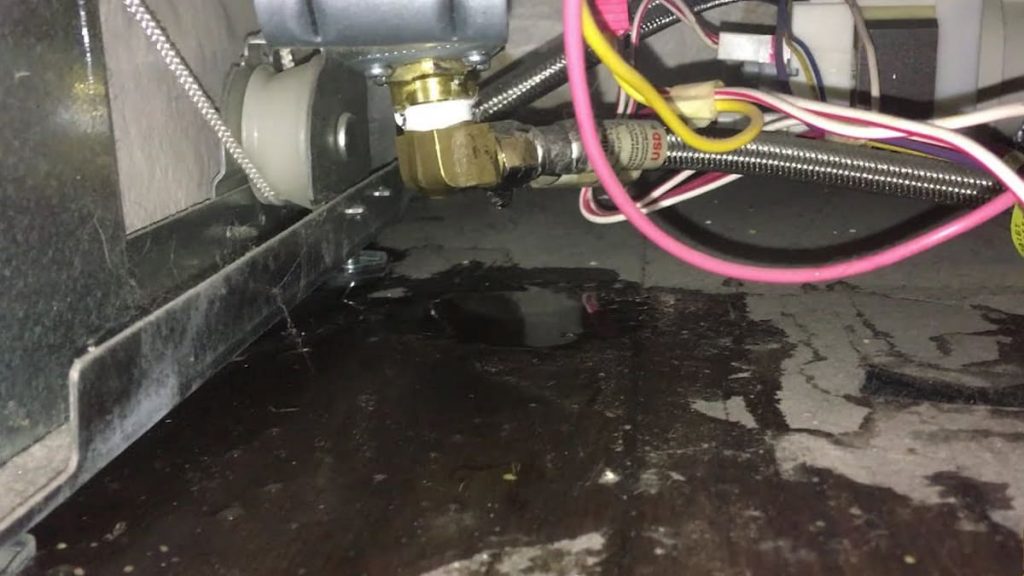 What are the most common causes?

At present, it is quite obvious that the leakage of the machine in the off state can make itself felt due to the occurrence and progression of individual circumstances. However, a logical and fair question arises, what is the most common reason?

In turn, the door, which leaks every now and then, may be associated with a weak or broken latch, gasket with wear. These elements are easy to replace in practice.

So many new owners and users of dishwashers are wondering if overloading them can lead to a similar problem. The answer to this question is obvious, and it is positive. In this situation, a clear understanding and awareness of the difference between an overloaded and a complete system is required. But this does not necessarily indicate that the problem is related to its damage.

If you put too many dishes in the dishwasher, the splashes of water are blocked, which divert it directly from the bottom of the tank. All this entails splashing liquid under the door. This issue can be resolved by minimizing the download before starting the cleanup. Failure to comply with the limit will entail a decrease in the performance level of the unit, because you may have to rinse the same batch of dishes several times.

Another common question that the owners of such a kitchen system ask is whether there will be a leak in the absence of leveling. The answer is also yes, because the level has an effect on the water in the tray. And this, in turn, is a determining factor for the possibility of leakage of the device. If it is uneven, then unstable operation is observed, which entails an increase in the water level in the pan. As a result, the water level accumulates inside the system.

As a result, as you might guess, even in the off state, a puddle forms, which in most situations flows later when the door is opened. Fortunately, such an unfortunate misunderstanding can be prevented, all that is needed for this is to rock the unit back and forth during its installation. If it sways, it means that it is impossible to talk about evenness, and the system needs to be corrected. Most dishwashers in practice have special adjustable legs that can be lengthened or shortened to achieve perfect evenness of the rack.

How much will it cost to repair the unit?

The difference in prices is quite large, especially if you touch on such an item as replacing parts. It varies according to the prices of spare parts. It is logical to assume that entire motor systems are more expensive than the simplest structural elements in the form of, for example, worn gaskets.

Another factor that greatly affects the final cost of repair or replacement work is the model of the dishwasher. It is one thing to complete simple repair tasks, and quite another to buy spare parts and put them in place of old parts. Moreover, some types of repairs can be carried out at home, for this you just need to choose the right tools. But it is best to turn to professionals who have a high level of qualification and decent work experience. 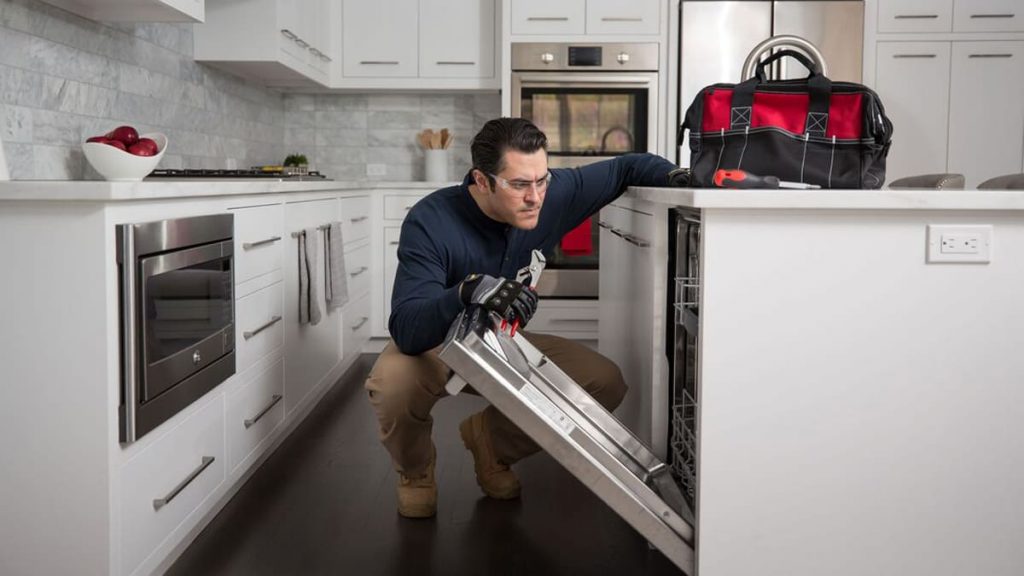 Buying a replacement system is only half the battle. The second half of the work is its installation – dismantling and installation. Some choose to act on their own, end up making mistakes, and end up paying double the price anyway. And someone immediately turns to professionals, but here you need to choose them as correctly as possible.

A good technician will conduct a thorough diagnosis to determine the cause of leaks, as well as perform a good repair so that the owner or user of the dishwasher does not have to deal with such difficulties again.