Sometimes the Samsung refrigerator noticeably overheats. Then we can make a clear conclusion that its internal fan has failed. In this case, a malfunction does not allow the unit to cool down sufficiently for the reliable preservation of food. Therefore, it needs to be fixed urgently.

Next, a guide will be presented that will demonstrate how to troubleshoot the said Samsung refrigerator system and allow it to become operational again.

There are a number of reasons why the specified part does not work. Some of them are more important, others less so. You need to provide a complete list of problems that occur. 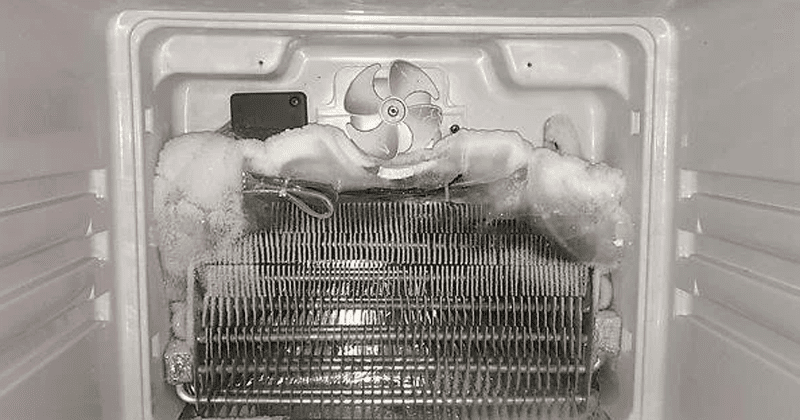 Excess ice near the evaporator fan

The fan inside the Samsung household appliance rotates to actively distribute the cold air coming from the evaporator, which regularly passes around its coils. The part continues to rotate, providing a significant reduction in overall temperature in all corners of the chamber. As a result, the space around absolutely all products is evenly processed, and no thermal zones are formed inside.

The main reason for the failure of the fan is that ice actively forms near its blades. Over a long period, its accumulation becomes more and more significant and, in the end, begins to interfere with the rotation of the blades.

This state of affairs leads to two conclusions. First, a knock is heard inside the refrigerator compartment. Soon the fan stops and stops rotating, and the chamber stops lowering the temperature.

In this case, it is necessary to melt the ice until the part is completely released. 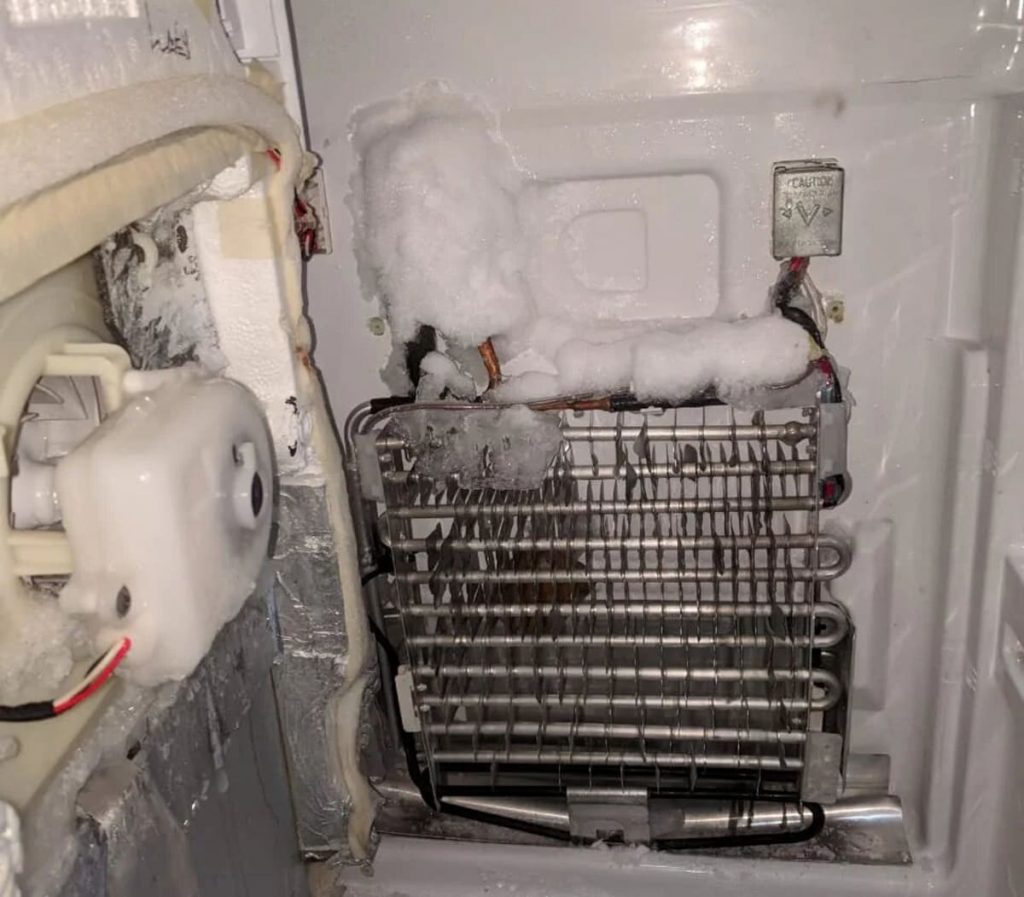 To do this, you need to unfreeze Samsung. This method is the simplest. It consists in disconnecting the refrigerator from electricity and leaving its door open. The defective part should also be removed and de-iced separately. But first you need to detach the back panel to gain access to it, and then remove it too.

Such a malfunction occurs quite rarely. But it also happens that various foreign inclusions get stuck inside the fan of the unit. The most elementary things can quickly disrupt his daily work and then he will completely stop. Most often, they are small fragments of containers or small pieces of cardboard that can get stuck in the fan of a household appliance.

This problem is quite manageable. Although it is difficult to say that it is simple. It is necessary to remove dirt from the fan. But first you need to make sure that the device is disconnected from the power supply. Then it will be possible to work calmly without fear of injury. 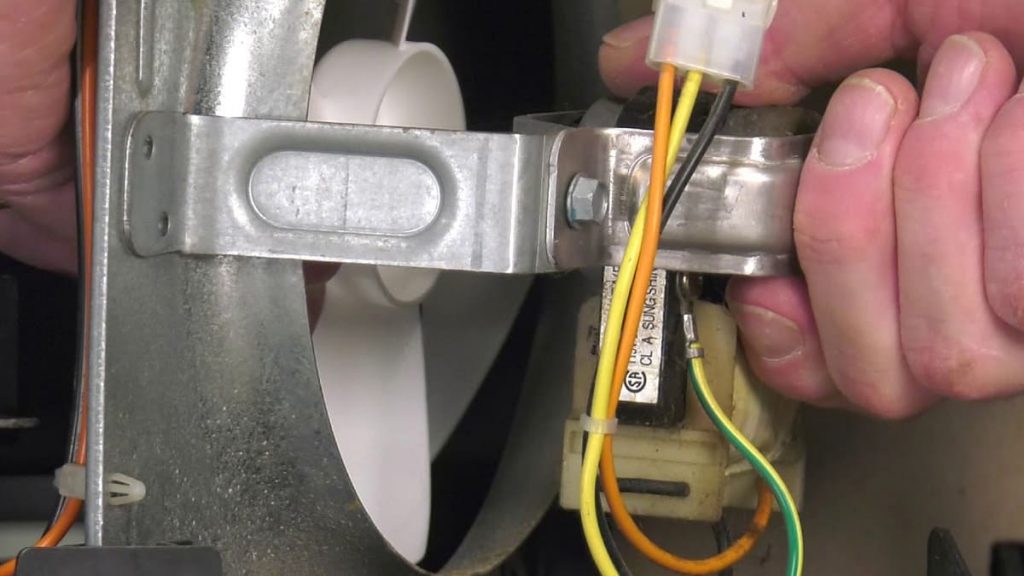 The overall design of a Samsung technology fan includes two main parts: the blades and the motor. When the system receives electrical power from the refrigerator, it begins to spin the blades. Those, in turn, drive the air in the required direction.

It also happens that the fan of the unit does not work because its engine burned out. Usually the cause in this case is a short circuit or power surge. But sometimes it also happens due to the accumulation of ice near the fan. Then, when the blades rotate, its motor works with a double load. If the problem is not urgently fixed, then it can quickly burn out.

There are a number of signs that point to this danger.

The fan can only be switched on when the unit doors are fully closed. Therefore, another important component responsible for the correct operation of the door is the door switch. It is connected to the main control board and sends a signal to it to open and close the wings. If they are tightly closed, then the fan starts to work.

If it is determined that nothing happened to such a part, then the cause is a malfunction of the door switch. It is he who prevents the fan from functioning. If the part breaks, it erroneously signals the main control board to open the door of the household appliance. Therefore, the main board does not provide power.

Then you should diagnose the system and change the door switch. It is located inside the top of the refrigerator door.

Access to the wiring requires opening it and then removing the door switch. Then you should take a multimeter and check the elements for the continuity of the electric current. If the cause lies in the malfunction of the door switch, it simply needs to be replaced with a new one. 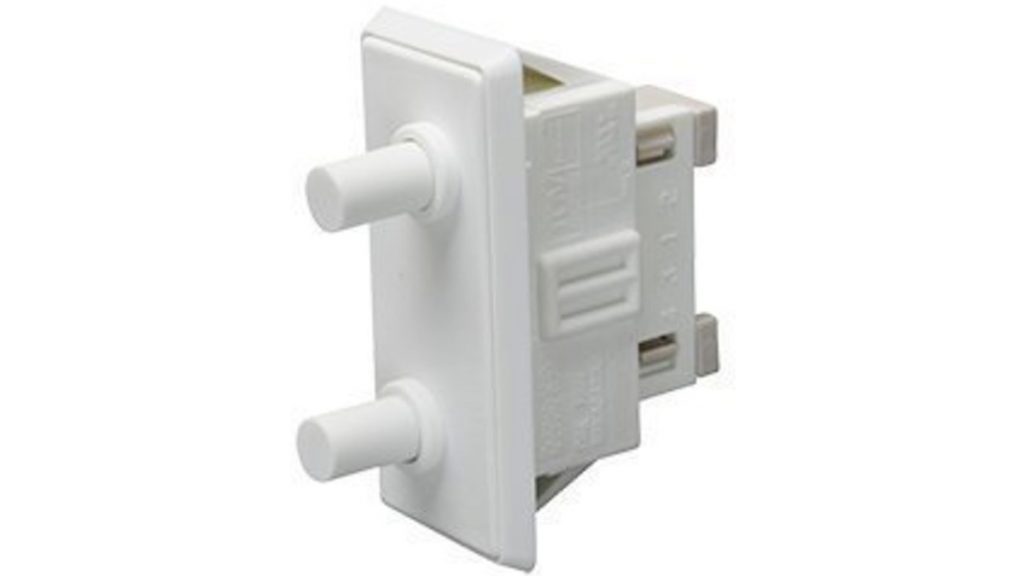 Breakage of the main control board

A similar detail is the intelligent center of the Samsung unit. It is a small printed circuit board that controls any element and all functions of a household appliance for complete cooling of products.

If it has already been established that the problems listed earlier are excluded, then the reason lies in the failure of the main control board. One or more of its parts, most likely, have become a victim of a short circuit or other damage. This does not allow the household appliance to start the fan as it should.

You cannot fix the situation on your own, since the board cannot be repaired. Therefore, before contacting expensive service centers, you need to absolutely make sure that the breakdown lies precisely in it.

Each of the listed reasons should be checked again, finally coming to the conclusion that it is not her fault. Then you need to put a new part in place of the failed part. The main board is located on the rear panel of Samsung appliances in a separate compartment closed by a panel. 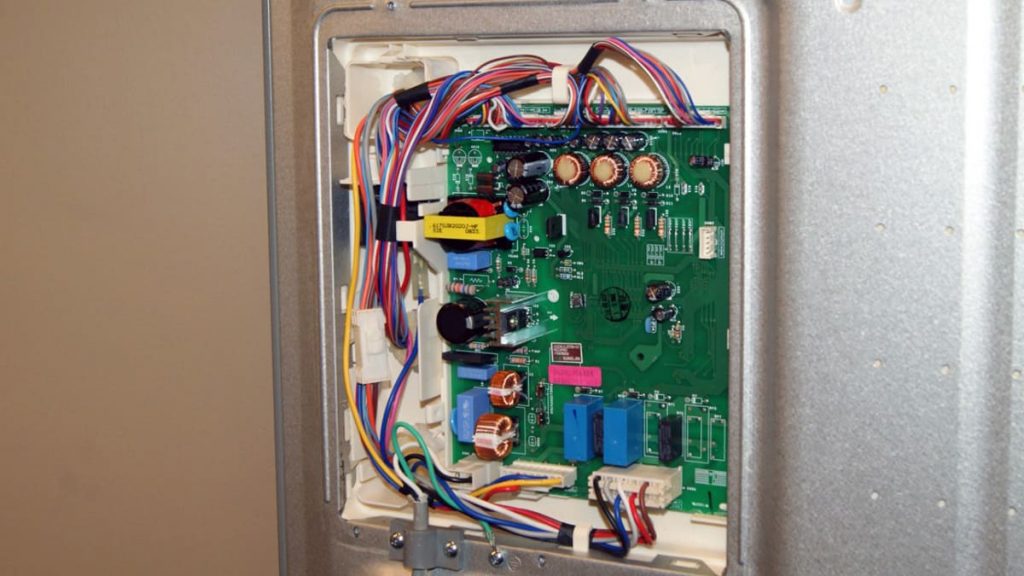 It must be disconnected and all internal wires removed. Then you need to remove the part by releasing the clips fixing it. After that, insert a new one in its place and reconnect the cords in their place.

Does Samsung have a fan?
This type of unit is equipped with a pair of fans. One of them serves the evaporator inside the chambers. The other is for the condenser fan behind the appliance, next to the compressor.

How to find a fan in a Samsung device?
You need to separate the back panel inside the chamber to gain access to the specified part. But first you need to clean the compartment and remove the shelves from it. The condenser fan will be located below the refrigerator near the compressor.

Why is there fan noise on Samsung units?
If a strong noise is heard, clearly coming from the fan of a household appliance, then it is due to the fact that an obstacle has formed for the operation of its blades. It becomes, as a rule, an excess of ice or an extraneous inclusion stuck inside.

What to expect if the fan stops working?
If an unexpected stop of such an important part occurs, then the air inside the refrigerator does not lose its ability to reach the required low temperatures. Therefore, the chamber will be much warmer than before.