Samsung is traditionally famous for its exceptionally high-quality home appliances. One of the most prominent places in its products is occupied by washing machines. But despite the fact that these efficient units perform much better than those of competing firms, they also sometimes fail.

The main causes of malfunctions include:

First of all, to eliminate them, it is necessary to determine the exact location of the leak. Next, the most important tips for solving the problems that have arisen will be given.

Water leaking from under the door of a Samsung household appliance

If liquid flows from the closed door, then the seal is most likely out of order. He is responsible for ensuring that she never leaves the tank. 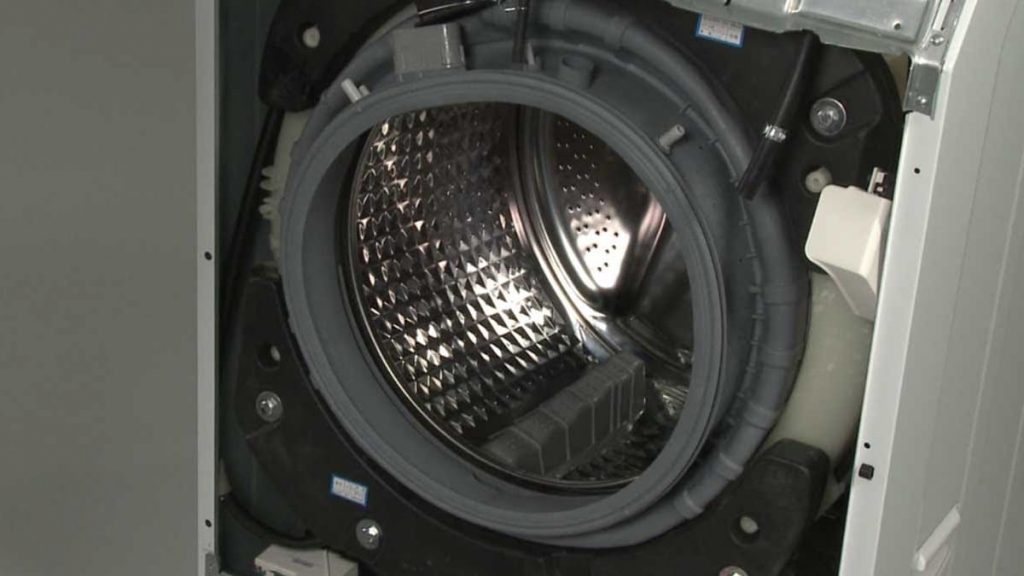 Usually, silicone rubber is used for such purposes, which reliably ensures a tight fit between the door and the body. The seal is given a rounded shape that allows you to securely clasp all the space it serves. It is completely sealed and neither water nor air can penetrate through such a barrier.

But sometimes it happens that some object gets stuck in the door seal. The seal can then no longer create a reliable barrier when the unit door is closed. Gradually, excess powder begins to accumulate on the pad. Sometimes it also happens that coins or socks get here, creating conditions for the liquid to flow onto the floor.

But most often, the gasket simply comes off or is damaged when removing things from the washing machine with a zipper, which touches the edge of the door and pulls out a section of rubber.

Dealing with this problem is easy enough. It is necessary to carefully examine the condition of the gasket in search of large objects stuck in it. Then it should be treated with a rag to remove detergent residue.

If the rubber is torn off or damaged, it must be completely replaced. 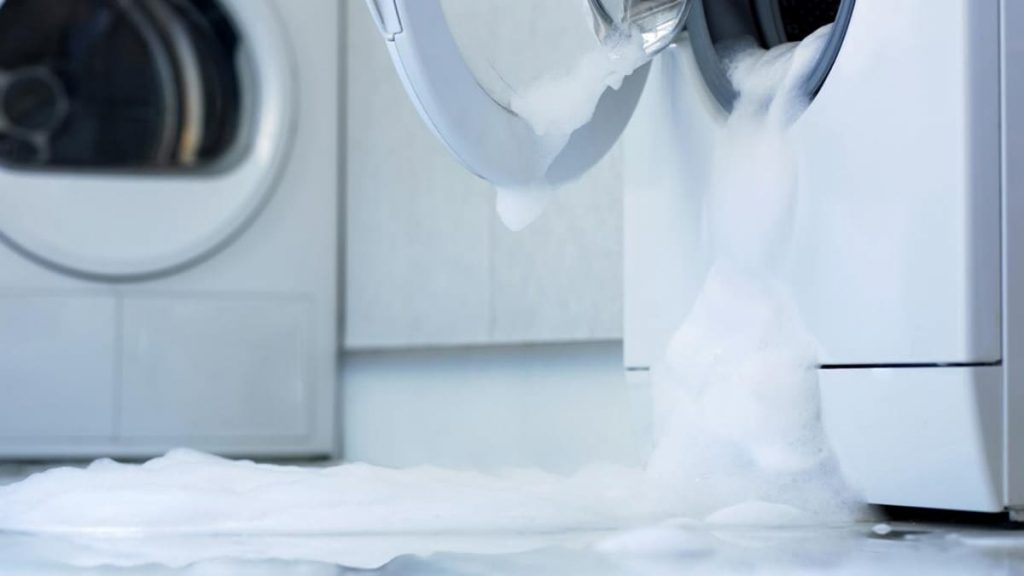 If liquid flows from under the bottom of the top-loading unit, damage to the drain pump cannot be ruled out.

Such an important internal part helps to quickly remove water from the household appliance as needed. The pump is activated when the spin cycle is completed or completed when the technique removes moisture from the processed clothes and throws it out of the drain tube.

A top-loading Samsung is usually equipped with a pump located at the bottom of the washing machine. As it is used for a long time, the part gradually wears out. Then it is able to crack or some other defect appears in it. Then the unit will try to pump out the liquid into the cavity of the drain hose. However, the water will start to pour out. Most often, such a problem can be noticed only when the entire floor is already wet.

The drain pump cannot be repaired, so you will have to purchase a new part to replace it. 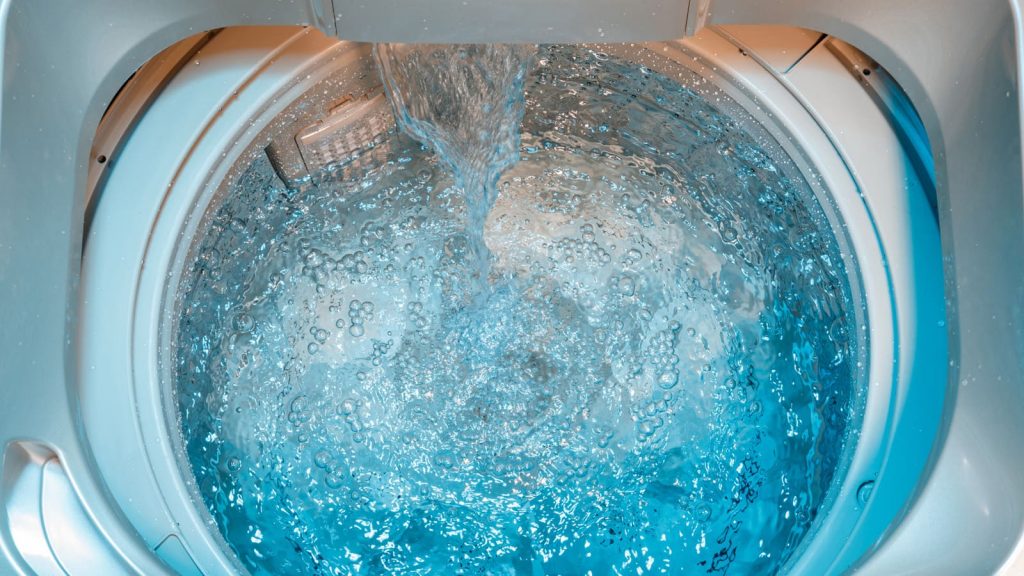 In some cases, it seems to the housewives that their Samsung appliances are flowing from below. But, when a closer study of the problem begins, it suddenly turns out that the liquid does not come directly from under the housing, but pours out of the lower filter. The case does not hold it if there is a pronounced blockage of the drain filter or it was initially installed incorrectly.

This part is usually located at the bottom of any Samsung washing machine. It serves to remove debris or foreign objects that accidentally got inside. Usually such an element is located behind a small panel. At first glance, it is almost invisible, so many owners of household appliances are not aware of its presence until they suddenly begin to leak.

If the liquid comes from under the drain filter, then most likely it is not fixed correctly or it has become clogged. It is also possible that after the previous cleaning, the part was not connected too tightly or too much dirt accumulated inside it, preventing the normal passage of water.

In this case, open the panel behind which the lower filter is located. Then you need to thoroughly clean and empty it, and then carefully check for blockages. Then, in search of other problems, it is worth carefully examining the condition of the case. After putting the part in order, you need to install it exactly in the right place.

During operation, you need to carefully monitor that it is installed correctly. A reliable seal must be created in the washing machine to prevent any leakage. 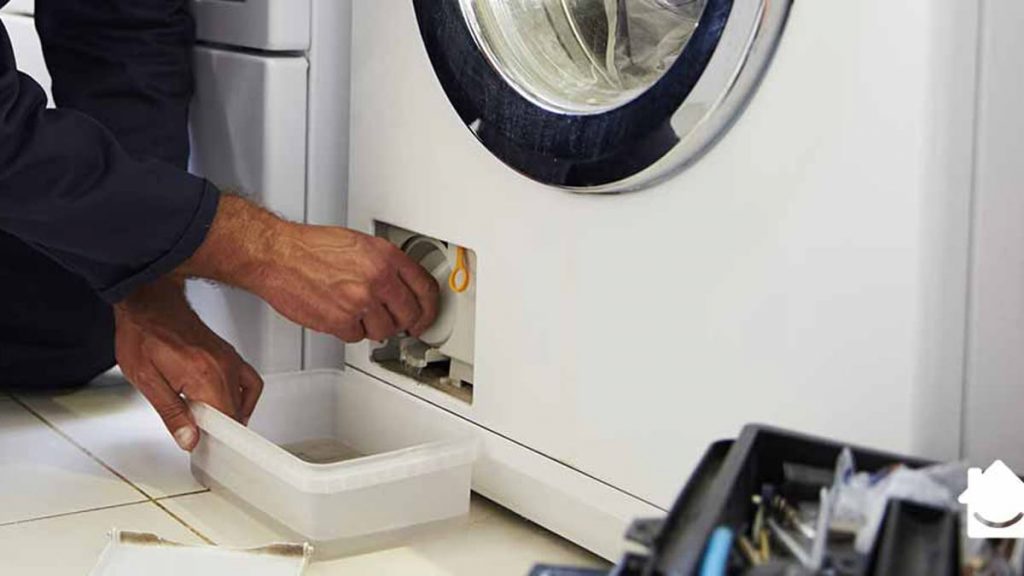 An unpleasant problem with the powder dispenser becomes even more noticeable. This is the name of a small box designed to add conditioner and detergent. If it is filled with them incorrectly, then water is usually sprayed due to its too high pressure or blockage of the tube leading to the tank. In a Samsung machine, it is the part that communicates with the soap dispenser and the drum. There is also a conductor that guides the fabric softener and powder into the laundry container.

A blockage or blockage of the corresponding hose cannot be ruled out. There are many products that can create this problem, but the most common one is overuse of soap. Over time, its concentration gradually begins to increase on various parts of the Samsung household appliance, among which is the hose tank. This type of leak is fairly easy to fix. If the liquid pressure is too high, then it is necessary to close the valve leading to the equipment. When it fills up, you need to adjust its power. And then you should find the optimal level that Samsung can dial without releasing water from the dispenser.

If it is clogged with something solid, for example, a pebble or candy gets into it, then you need to turn off the washing machine. Then you need to remove its cover and remove the foreign object manually. Sometimes the seal from the detergent cap also gets into the dispenser. Then it blocks the hose and causes a leak. 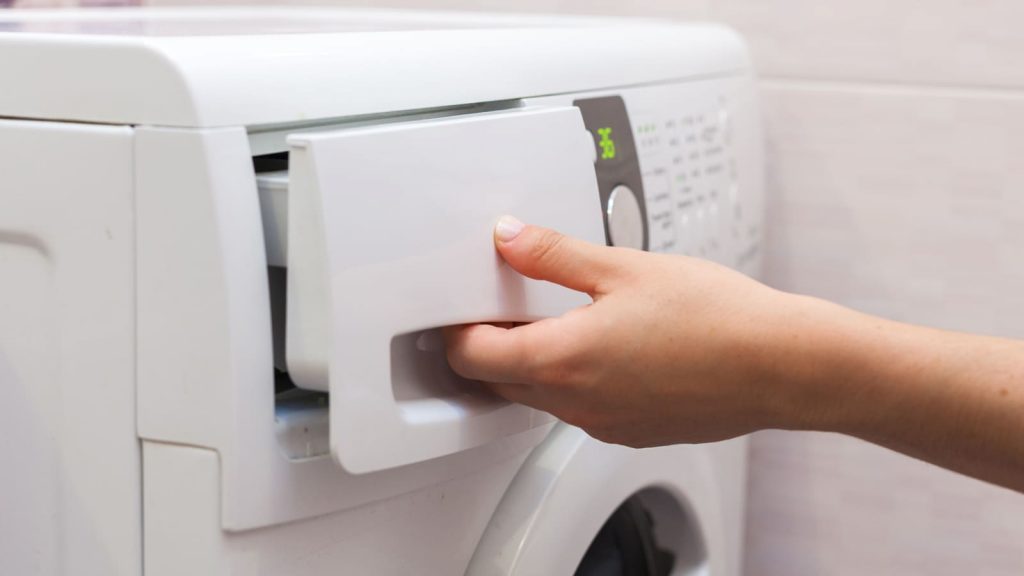 But if the problem is caused by a capacitor or soap that has not completely dissolved, then you just need to be more responsible in choosing their volume. To eliminate the problem, slowly pour warm water into the dispenser, which helps to dissolve excess powder. If the hostess suspects that she constantly exaggerates the required amount, then it is possible that he has already accumulated inside the car.

In this case, you need to run a self-cleaning cycle, if available on this model. If it is absent, then you should start washing without laundry with the maximum temperature of hot water. Such a step will help prevent new difficulties that arise with an excess of detergents.

Using too much soap can also cause a leak. It is sometimes associated with Samsung’s rear air vent. Washing machines are equipped with a safety valve. It is also present in other units, which include, for example, a dishwasher. The task of this part is to regulate the air flow and provide pressure inside the machine during its operation.

In this case, the main cause of leakage is most often the same excessive use of detergents. The choice of their too large volume provokes the accumulation of the resulting hardly soluble compounds in various parts of the Samsung unit. Gradually, their number increases and leads to a variety of problems. Sometimes their essence lies in the fact that an excess of foam accumulates in the household appliance, which does not find a way out. Then he rushes to the rear opening of the ventilation passage. 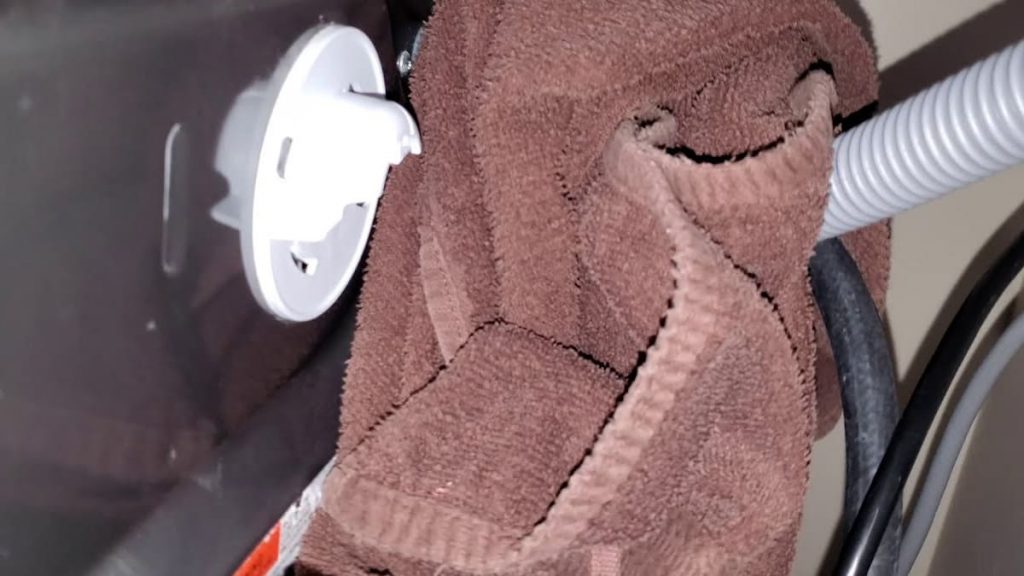 It is very easy to fix this problem. True, it will take a lot of time. It is necessary to dilute soap residues with water for their unhindered removal from the equipment. For such purposes, you need to use a large amount of very hot liquid.

Modern Samsung washing machines are usually equipped with self-cleaning cycles. They consist of temperature rise settings required to clean the unit. The process is enhanced by constant stirring to dilute and loosen the remaining powder. It is worth going through this cycle several times until the rear vent of the household appliance stops emitting anything.